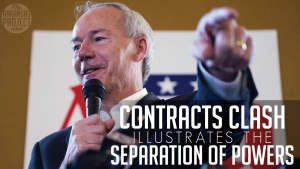 Asa Hutchinson is moving forward with a technology contract between the Department of Human Services and Deloitte Consulting despite some Senators’ objections.

Gov. Asa Hutchinson’s administration will forge ahead with a proposed state Department of Human Services technology contract after a majority of senators at Wednesday’s Legislative Council meeting voted twice against favorably reviewing the proposal.

The governor said in a statement it was important not to delay the contract.
Friday, the council adjourned midway through its agenda after senators and House members clashed over the proposal. The council set a meeting for Wednesday to again attempt a review.
House members voted 21-2 to complete the council’s review of the proposed contract before senators voted 9-6 not to review the proposal. Senators initially voted 10-6 not to review the proposal. Then the council expunged that vote at the urging of Senate President Pro Tempore Jonathan Dismang, R-Searcy, clearing the way for the second vote.
The department’s proposed three-year, $75.3 million contract with Deloitte Consulting of Hermitage, Tenn., has drawn criticism from some lawmakers in the past several days because it’s more costly than the three-year $54.4 million proposal submitted by current contract holder Northrop Grumman of Falls Church, Va.
But proponents of the Deloitte Consulting contract counter that it would cost $5 million a year less than the current contract with Northrop Grumman. They also contend that Deloitte Consulting won the bid on the basis of its superior technical expertise. Northrop Grumman had contracted with the department for more than 20 years, said department spokesman Amy Webb.

There are really two questions at work here. The first question is whether the executive branch made the best decision when it awarded this contract to Deloitte. The second is whether the legislative branch currently has any recourse under state law to block or delay the Deloitte contract.

This post will deal with the second question, largely because that first question is only of academic interest — because the executive branch has already created a binding and enforceable agreement.

In my view, the answer to the second question is that the legislature currently doesn’t have the power to stop this contract from being implemented.

If enough legislators feel strongly about the inadequacies of the state’s procurement process, I’m sure there are reasonable reforms that could be passed in the next legislative session. That is because, again, the legislature has the power to regulate future agreements — but not the power to overrule agreements that the executive has already made.

As it stands right now, lawmakers’ only option seems to be holding meetings to review state contracts, but then proceeding to vote to not review contracts like this DHS-Deloitte agreement. And that isn’t much of an option — it’s really only a delaying tactic — because the only barrier to the carrying-out of the contract at that point is the executive’s willingness to accede to the wishes of the legislature. If the executive wants that contract to be carried out, it is enforceable after a review period — whether the legislature calls what it does a review or not. That means that whenever the executive runs out of patience, he or she (or the agency that acts in the name of the governor) can have the contract enforced at that point.

In other words, the only barrier to the enforcement of the contract is legislators’ willingness to take offense and the decision of Governor Hutchinson to give that offense-taking any weight. And that is a very weak barrier. If the governor is willing to say “I want this contract enforced, whether or not it irritates a few legislators,” that is all that is necessary for the contract to be in full force.

There are a number of lessons here. I think the primary lesson is that the legislature should act on those issues that it is capable of affecting. Those issues make up a very long list — but vetoing contracts isn’t on it.

(If you’re interested in a more extensive discussion of how the state Supreme Court has understood a legislative contract veto to violate the separation of powers, read Chaffin v. Arkansas Game and Fish Commission (1988).)