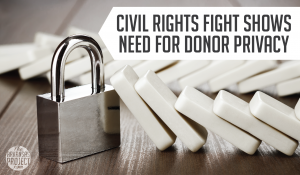 Should the government mandate that nonprofit organizations reveal their supporters?
That is what some legislators (such as Rep.

Clarke Tucker) want. There was a push during the 2017 legislative session to enact a bill that would force nonprofits that engage in advocacy to report to the government who funds them. I wrote a paper explaining why this idea was not just flawed, but dangerous. In that paper, I noted that the Supreme Court held in 1958 that “Inviolability of privacy in group association may in many circumstances be indispensable to preservation of freedom of association, particularly where a group espouses dissident beliefs.”
The Supreme Court case that concluded this was a result of Alabama’s pursuit of the membership rolls of the state’s NAACP. For those interested in more details about this decision, the Goldwater Institute recently published an examination of this case by its senior attorney Matt Miller. Why now? Because it is the 60th anniversary of the decision in NAACP vs. Alabama. Miller explains why a case decided six decades ago is relevant today::

A recent string of campaign-finance cases involving groups that support or oppose candidates for office has weakened protections for donors’ right to remain anonymous. And the reasoning of those cases has been used by lower federal courts to undermine anonymity in a very different context—non-profit speech that educates the public about significant issues, such as ballot initiatives.

Largely forgotten is the reasoning of the original case, which recognized that anonymity and privacy are vital because they allow people to support causes they believe in without fear of reprisal by people who disagree with their beliefs. This need for privacy is all the more vital today, where the internet makes it easy to publish lists of donors—and easy to harass and intimidate them. The stakes may be different today than they were in the 1950s, but those stakes are still real for people who have been harassed online and in person, and even lost their jobs, just because they held unpopular beliefs. As cities and states across the country continue to adopt laws requiring non-profits to disclose the identities of their supporters, the question of donor privacy will eventually return to the Supreme Court. When it does, NAACP v. Alabama will be front and center as the Court decides whether to uphold—or ignore—its legacy.

Mandatory reporting for nonprofits that engage in advocacy can lead to harassment, intimidation, and a weakening of the political process. This is touched on in the paper I wrote and more amply demonstrated in the Goldwater Institute report.

Rep. Tucker’s mandatory reporting bill died last year when it failed to make it out of committee. Arkansas legislators would do well to read Miller’s history of NAACP v. Alabama and why donor privacy is essential for a healthy civic participation. Doing so will ensure that bad ideas like Rep. Tucker’s bill continue to be shelved in the future.