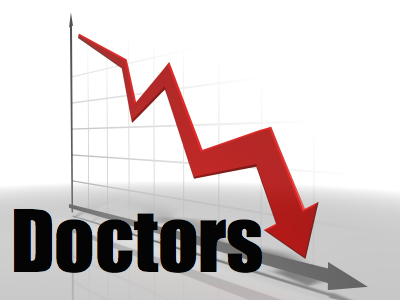 At a health care forum I attended in Conway last month, state Senator Missy Irvin (whose husband is a physician) spoke about the shortage of doctors in our state.  In the rural parts of Arkansas, it is tough for doctors to stay afloat because of the high quantity of Medicaid patients whose coverage does not cover all of their medical costs.  In fact, Arkansas doctors must see 40 Medicaid patients a day just to break even, according to the senator. (Assuming an eight-hour workday, that means break-even doctors will be able to devote exactly twelve minutes to each patient.)

Not only is Arkansas short on doctors, 83% of doctors nationwide are now considering leaving medical practice thanks to Obamacare.

Local news outlets have been following these developments for a while (following the lead of The Arkansas Project, no doubt):  In late June, THV reported that when it comes to having enough doctors to go around, Arkansas ranks 48th with an average of 189 physicians for every 100,000 people, a problem that could turn into a crisis by 2014.  Once again, “Thank God for Mississippi,” as Arkansas ranks near the very bottom of the 50 states.

Now the problem has become so bad on a national level that even the New York Times can’t ignore it, making a shockingly honest admission in the first paragraph of a recent column titled “Doctor Shortage Likely to Worsen With Health Law:”

“In the Inland Empire, an economically depressed region in Southern California, President Obama’s health care law is expected to extend insurance coverage to more than 300,000 people by 2014. But coverage will not necessarily translate into care: Local health experts doubt there will be enough doctors to meet the area’s needs. There are not enough now.”

Coverage won’t translate into care?!  And here I was thinking Obamacare had solved all of our health care problems.

Other staggering stats from the NYT piece:

In Arkansas, there were 514 vacancies for primary care physicians last year.  That number is expected to rise to 860.  Family practice had 282 vacancies; that number could reach 473 as soon as 2016.

In short, the beneficiaries of Obamacare would do well to plan their episodes of care around this advice: don’t get sick!