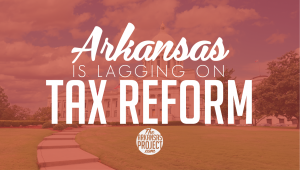 “Arkansas is falling behind by standing still.”
That’s the message of Nicole Kaeding from the Tax Foundation and Jeremy Horpedahl of the University of Central Arkansas and the Arkansas Center for Research in Economics. TAP readers should check out their op-ed in the Democrat-Gazette. They discuss why it’s so important for Arkansas legislators to follow the lead of lawmakers in other states in reforming the structure of the state’s taxes.

As they point out, states across the country are reforming their antiquated tax codes. These states are removing barriers for individuals and corporations looking to open businesses, make money, and grow the economy. By not acting, Arkansas is putting itself at a competitive advantage.

Other states are being aggressive in simplifying their tax codes. They are reducing the costs for individuals and will attract new jobs and investments to their state because they were prudent as well. By expanding their sales-tax bases and using tax triggers, the states successfully balanced revenue availability and stability with simpler and more neutral tax codes.

Arkansas’ tax code was last reformed in 1971, and sadly, it looks like it. The state ranks 38th in the Tax Foundation’s State Business Tax Climate Index, and it is hardly the tax code that any policymaker would sit down to create today. After almost 50 years of well-intentioned tweaks and changes, the code’s fundamental structure needs to be rebuilt.

This is something that the Advance Arkansas Institute has pointed out, too. Here is what Marjorie Greenberg wrote in “How to Bring Tax Relief and Tax Reform to Arkansas”:

Arkansas has failed to keep up with a national trend: significant reductions in state and local tax burdens across the nation. All but four states in the Union have either reduced their overall tax burdens, or left them essentially unchanged, since 1977. Unfortunately, Arkansas has increased the tax burden on its citizens over the same period, changing its relative position among the states from “some of the least taxed at 8.6 percent to some of the more heavily taxed with a burden of 10.1 percent.”…
Our state’s history of tax increases has made us uncompetitive with neighboring states’ business environments. Furthermore, the long investment in Arkansas government services has not generated personal income growth in Arkansas – which, after 40 years of relatively large spending by state and local government, ranks near the bottom – 46th out of 50 – in per capita income. Our 40-year experiment in heavy levels of state and local government spending has not improved Arkansans’ financial status. It’s time to follow a different path.

Readers of TAP know that a state task force is trying to come up with ways to accomplish the goals that Kaeding and Horpedahl lay out. This task force has heard a lot from these two scholars, and its members would be wise to pay attention to them.

If task force members fail to propose a solid, pro-growth tax reform plan, or if legislators fail to enact it, the state will continue to see lackluster economic growth. Lawmakers in other states have taken advantage of the opportunity to rewrite their tax codes to grow jobs and personal income. Arkansas should do the same.