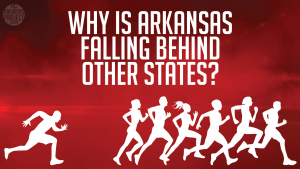 Most evil people aren’t born evil. In life and in literature, many villains become evil through a series of bad choices, most of which are small and minor. Those who become villains don’t suddenly say “Today I will fall from grace”; it is not so intentional as that. In retrospect, of course, the path away from good seems crystal clear.

After decades of small fiscal mistakes, Arkansas’s state government has found itself in a dark place – a place of high taxes and high spending.  Like the villain, we wake up suddenly and realize that we have no idea what went wrong — but we’re not where we ever wanted to be.  Arkansas has made some bad choices in its tax policies — always for what seemed like the best of reasons — but these have coalesced into a high tax burden that hurts our citizens.

One could hope that just as Arkansas is in the middle of the United States, it would be in the middle relative to other states’ tax burdens. Sadly, this isn’t true: our neighboring states contain some of the lowest-taxed citizens in the Union. Oklahoma has the blessed rank of only 40th highest per-person tax burden. Mississippi is 41st. Texas is 46th, Tennessee is 47th, and Louisiana is 45th. Missouri’s relatively pricey tax burden is only 29th. In our region, Arkansas taxes are uniquely high.

All of Arkansas’s extra taxes have gone to feed extra state government. A relatively larger percentage of the average Arkansan’s income goes to support government. Arkansas’s neighbors bear much lighter burdens. In fact, Arkansas has the highest tax burden of all states in the South and Southwest regions.

Arkansas has failed to keep up with a national trend from the last 40 years: reducing state and local tax burdens. Since 1977, all but four states in the Union have either reduced their overall tax burdens or left them unchanged. Arkansas has made a different choice: our policymakers increased the tax burden on our citizens over the same period. That increase in tax burden changed Arkansans from some of the least taxed (at 8.6 percent) to some of the most heavily taxed (with a burden of 10.1 percent).

I hope that Arkansas can reverse its slow collapse into a high tax burden state. Since 2015, Governor Hutchinson has worked with our legislature to make first steps to cut taxes and reduce government.  More progress is needed.

After all, some villains redeem themselves. Sometimes, the villains regain their decency and their principles. Arkansas can too. It is within our power to return prosperity and liberty to our citizens. Our policymakers have the opportunity to turn away from the dark side. But you’ll need to wait for the sequel to this essay to find out how.

Marjorie Greenberg is the author of AAI’s new book, How To Bring Tax Relief and Tax Reform to Arkansas.

One thought on “Why is Arkansas Falling Behind Other States?”