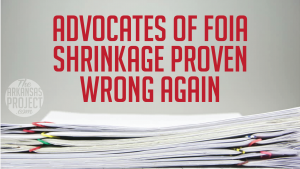 In the first state Supreme Court opinion to cite to the latest version of the treatise “The Arkansas Freedom of Information Act” (which I coauthored), Justice Rhonda Wood recently penned a solid decision interpreting the Arkansas FOIA.
That decision involves a 54-year-old murder case. No charges had ever been brought, and none were forthcoming. Nonetheless, the police sought to make use of the FOIA exemption for ongoing investigations when the decedent’s family sought to review the police’s file on the case. I don’t think it’s an exaggeration to say that the police, and the government, wanted the file to remain exempt from transparency forever.
Justice Wood quickly disposed of this folly, quoting the treatise:  “Police and prosecutors should not be permitted to apply this exemption as a matter of course until conviction or acquittal, or indefinitely until a charge is brought, if there is no genuine interest in enduring secrecy. To do so would excessively insulate the government against legitimate probes by the public and media into the performance of law-enforcement functions, even apart from the disadvantage to criminal defendants.”
That’s all good news, of course.  But it’s worth noting that 50 years after the enactment of the Arkansas FOIA — and 54 years after the tragic murder of Ruby Lowery Stapleton – some public officials still resist openness and transparency.
I’m reminded of the debates in the legislature earlier this year over shrinking the scope of the FOIA. One government-funded advocate of shrinking the FOIA (Brad Phelps, general counsel for the Arkansas State University system) argued as follows:
“Existing caselaw says when you apply an exemption to FOIA, such as would be created by this bill [S373], that exemption is to be narrowly construed.  And that narrow construction will apply to any one of the 23 exemptions.  It would be applied to this one.  I think the risk of it [the proposed new exemption] being applied too broadly simply is not there because the Arkansas Supreme Court tells us that if we do, we’re in violation of the law.”
Judge Wood’s excellent opinion shows that Phelps’s argument is indefensible. We wouldn’t continue to need state Supreme Court opinions to set bureaucrats straight on the law if those bureaucrats consistently obeyed FOIA’s strictures about the narrow construction of exemptions. (Notably, when pro-secrecy bureaucrats take a position that opposes the public’s right to know what their government is doing, that position will be defended by the office of Arkansas’s attorney general.) The argument that Phelps presents – namely, FOIA rights will be vindicated after multiple levels of appeal, so what’s the problem? – is not a serious one; when the average citizen has to resort to legal counsel to vindicate his or her rights, this is not insignificant in terms of time and money.
The bottom line is that, regularly, too many government officials interpret FOIA exemptions very broadly, which creates large burdens for citizens which cannot just be handwaved away. That is why new exemptions of the kind that were proposed last session by Sen. Bart Hester and Rep. Bob Ballinger in SB 373 are so very dangerous.
I believe that SB 373 failed to pass because of the sound judgment of some legislators who know how FOIA works in practice: I suspect that those legislators know from experience that some government bureaucrats just cannot be relied upon to hew to the modest scope of FOIA exemptions that the statute lays down. Regrettably, the argument that bureaucrats will consistently do the right thing, absent constant vigilance from various authorities (including courts of appeals that actually pay attention to the law), is an empty one.
Wood’s opinion contains many sound lessons. Perhaps the most concrete one is a maxim that applies not just to this case:  “The victim’s family and the public are entitled to know how the officials in this case, i.e., law enforcement, performed their duties.”

One thought on “Advocates of FOIA Shrinkage Proven Wrong Again”