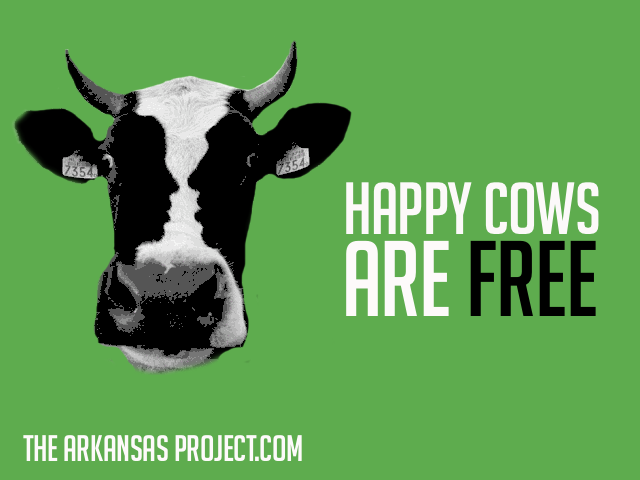 I wrote yesterday about Representative Randy Alexander’s bill to legalize the sale of lacteal secretion, more commonly known as raw cow milk. But these are just my opinions, backed up by mounds of evidence — and as many of you constantly remind me on Twitter, I’m just an obnoxious “cow patty” head. So let’s hear from the bill’s sponsor, shall we?

Representative Alexander told me that, for him, there are three key questions here:

2. Should Arkansans be able to purchase products they want to?

On question 1, Rep. Alexander says the answer is “no.” Raw milk isn’t any more dangerous than other foods.

Just like other foods, if it’s old or it’s contaminated, it will make you sick. As I look at statistics over the last several years, nobody has died from raw milk. They’ve died from lettuce and they’ve died from other vegetables and other things, but from raw milk we haven’t had any fatalities.

Rep. Alexander said these statistics come from the Center for Disease Control and cover the entire nation, which includes places where raw milk is legal. (A quick Google search reveals evidence to support this claim.)

As for question 2, Rep. Alexander says Arkansans should be free to purchase the products they choose:

To me, the most important reason to pass this bill is more general. To me, it’s a liberty issue. If you’ve got a product like raw milk and a farmer wants to sell it and you have an adult that is informed — that is aware that this is raw, unpasteurized milk, I don’t think it’s the government’s business.

Interestingly, raw milk is legal in California. There — not exactly a libertarian utopia — you can buy it in the grocery store. (If they’re not careful, Californians might accidentally start to believe they are free people.)

It’s like with any food. If you handle it properly…you should be fine. We eat raw oysters. My wife eats chocolate chip cookie dough which has raw eggs in it. People eat sushi. (When I was growing up in Texas, we called it ‘bait.’) People eat very rare meat…We’re not saying that it’s totally safe, we’re saying there’s not any greater risk than with a lot of other foods than we eat.

Will the dairy industry get creamed? Rep. Alexander said the bottom line is “so what?,” indicating that the benefit to consumers should trump. He added, however, that research from other states that have legalized raw milk have not demonstrated negative effects on the dairy industry.

Finally, what about the cost — will this new policy incur greater costs to taxpayers via the Department of Health because they will have to start monitoring raw milk? No way, says Rep. Alexander, because the state already monitors raw milk. “All the milk that comes in from the dairies to be sold retail — they take a sample. That sample goes to the lab and they test it. If it’s bad they dump the tanker trunk.” And that’s not the end of the matter: the department then goes to the dairy farm, isolates the problem, and resolves it before that farmer is allowed to bring any more milk to market. This is unpasteurized milk they are testing, just like the milk that Rep. Alexander’s bill would legalize. Herd enough yet?

Rep. Alexander’s bill does not enable a libertarian paradise, because it does authorize the state Department of Health to regulate raw milk sales, albeit loosely. However, this policy change represents a moooo-ve in the right direction towards economic freedom. If you or your family want to purchase raw milk, you should be allowed to do so. You don’t need the state to give you permission.

This morning, the House Ag Committee failed to pass the raw milk bill out of committee. You can view the roll call vote tally here. The bill can be brought up again. As always, we’ll keep you posted.

2 thoughts on “Representative Alexander Makes The Case for Milk Freedom”