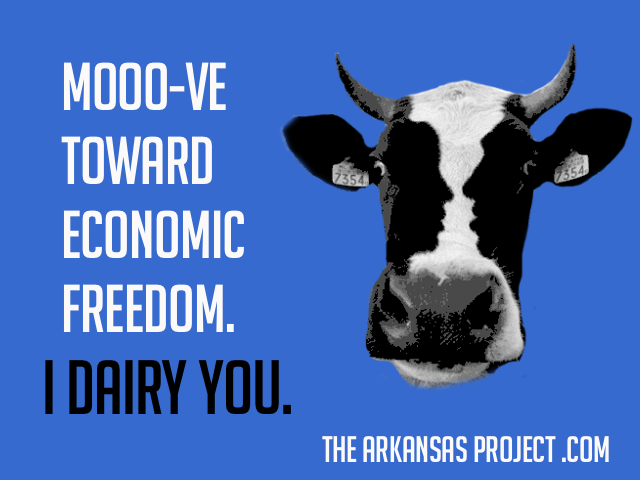 The Arkansas legislature is faced with a question: Do Arkansans have the right to buy and eat what they choose? The question may sound silly, but it is neither frivolous nor unimportant. It is basic: if legislators cannot get this issue right, it’s unlikely that they will be able to come down on the side of freedom on larger issues. The steaks (ahem) are high.

The proposition is a bill by Representative Randy Alexander (HB1536) that would legalize the sale of raw milk in Arkansas. You can read it here — it contains all types of fun phrases like “lacteal secretion” that make you want to pop the top on a gallon of 2%.

In Minnesota, a man was recently charged with three misdemeanors for operating an underground raw milk distribution chain, or “milkeasy.” (Okay, that isn’t really a word.) He doesn’t sell raw milk; he just delivers it to consumers who lease cows from Amish farmers. Thankfully, he was acquitted by a jury of his peers, but it should concern you that in America — the “land of the free” — we charge people with crimes for drinking milk. I say that’s udderly ridiculous.

Some of you may be surprised to learn that the sale of raw milk is currently illegal in the state, and has been for sometime: in 1941, as the Roosevelt regulatory tidal wave swept the nation, Arkansas passed Act 114 in the name of “safety.” The passage of that act led to this lengthy list of rules and regs — apparently the state thought (thinks?) they know more about dairy farming than dairy farmers do. Penalties to this day includes fines of up to $300 (A.C.A. § 20-59-202). To their credit, the state legalized some raw goat milk sales in 1995. As far as I can tell, no plagues have broken out since then. But, as a result of classic bovine discrimination, raw cow milk has remained illegal. This is problematic for three reasons.

1. This law advances nothing but old-fashioned protectionism and cronyism. In the ‘40s, states across the country passed these ridiculous bans — but not of their own fruition. Yes, the bans were part of a Rooseveltian big-government mindset that swept the nation, but the explanation is even simpler than that. You’ve heard of Big Business, meet its ugly step-cousin “Big Dairy.” Big Dairy (the dairy industry) lobbied states all over the country to pass these bills in order to protect their milk sales. If you could buy milk from Farmer Joe for a few cents per gallon (back then, before Ben Bernanke was running the currency, things were a lot cheaper), why would you ever purchase milk from a big vendor? So Big Dairy largely got its wish. States began outlawing raw milk in the name of “safety”; unfortunately, respect for individual freedom got creamed.

2. You have a right to buy and eat what you want. Farmers have the right to sell and produce what they want. Is there a more basic tenet of freedom than the right to eat what you choose? We constantly hear many legislators proclaim “my body, my choice,” and yet many of them insist on having a cow by opposing this common-sense measure that will allow Arkansans to eat and drink what they choose. More to the point, we don’t need the government to tell us what we can and cannot eat. They don’t know better than us about what’s good for us. They also lack the proper authority to impose these types of restrictions. Arkansans have a fundamental right to choose what they eat — we don’t need government to taste-test everything for us. Some people think that invoking individual freedom on this issue is a little cheesy — but to my mind, this value is extremely mooooo-ving.

3. Legalized raw milk sales could easily lead to lower prices for milk consumers. If the state legalizes raw milk sales, the demand for processed milk might decrease (or, indeed, curdle) — I know several people who want to purchase raw milk, but do not because of the law. We also know that, because of the laws of supply and demand, this would most likely lead to a decrease in processed milk prices. Everyone wins.

The bill is scheduled to be heard before the House Agriculture, Forestry, and Economic Development Committee tomorrow morning. You can tune in live on the House website.

Tomorrow: an interview with the bill’s sponsor, Rep. Randy Alexander.