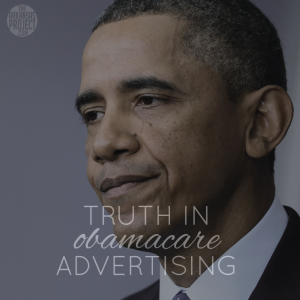 Five years after enactment, the Affordable Care Act (better known as Obamacare) is still a controversial law. Under attack in Congress, in the courts, and in the statehouses, this legislation continues to divide America. As one might expect, the (solidly Republican) Arkansas Congressional delegation is strongly opposed to Obamacare’s implementation.
While there are many legislative routes to undermine or repeal Obamacare, Rep. Steve Womack has introduced a bill that would simply educate the public about it. H.R. 537, the Truth in Obamacare Advertising Act, would require any advertising by the federal government that promotes the law or its benefits to note that it’s being paid for by taxpayer dollars.
According to Rep. Womack’s office, the federal government will spend over $773 million in this fiscal year to reach out to healthcare consumers and educate them about Obamacare. Rep. Womack’s bill would simply say that when the government does this, it lets people know that their taxes are paying for it.
Here’s the rationale his office gave for the bill:

While the administration conducts this massive advertising campaign to increase the law’s popularity, taxpayers, who largely view the law unfavorably and whose dollars fund these campaigns, are left in the dark on how their dollars are being used to promote Obamacare.

In a statement, Representative Womack was more direct about his motivations. “This bill brings light and transparency to the administration’s continued use of tax dollars to pay for propaganda ads to prop up Obamacare,” he said.
I’m sure Obamacare supporters would quibble with the use of the term “propaganda,” but it’s clear that federal “education” efforts for this law are slanted in a certain direction. After all, you don’t find many Health and Human Services ads that discuss the (for instance) the law’s many constitutional vulnerabilities. The government’s ads generally talk about how great the law is. Given the fact that Obamacare is still a live political issue, it seems only reasonable to require that these ads note who is paying for them.
The rest of the Arkansas congressional delegation joined Rep. Womack in sponsoring this bill.
I commend Rep. Womack for trying to bring a little transparency to the Obamacare debate. If this bill becomes law, perhaps the next legislation could be a bill that requires Obamacare supporters to be truthful about what the bill will do and how much it will cost. Perhaps he could name it something like the “Jonathan Gruber Transparency Act.” It would be a fitting way to memorialize the Obamacare architect who explained that a lack of transparency is the only reason the Affordable Care Act is now law.