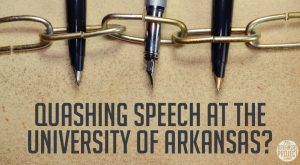 Here at the Arkansas Project, we continue to have concerns about the direction of the University of Arkansas. We see what looks like an organized effort that is antithetical to the values of a true university: namely, we see attempts to not only undermine speech that is critical of those running the university system, but also to dilute the quality of education in Arkansas.

The Arkansas Project previously exposed the University of Arkansas’s in-house counsel when they misled the legislature during a misguided campaign against the state’s Freedom of Information Act. Our article described how these taxpayer-paid government attorneys lobbied the legislature in favor of anti-transparency measures (policies which, coincidentally, would have also greatly lightened their workloads).

Now it looks as if these attorneys are engaged in another lobbying campaign that would not be in the public’s interest. This time, they are trying to persuade the University of Arkansas Board of Trustees to adopt a board policy revision that would eviscerate the ability of employees to question the administration. In their proposal, these attorneys are pushing a policy that would appear to strip the free-speech protections that govern faculty critiques of University of Arkansas administrators’ behavior.
Theses attorneys are claiming that their changes are minor “updates,” even though this looks like a major change in the rules to me. Are university lawyers again seeking to directly insulate their client administrators from scrutiny and criticism, this time from faculty instead of the public?
The University of Arkansas attorneys have put out a list of FAQs (frequently asked questions) that appears to be light on actual facts. Trustees and others who rely on these FAQs will probably come away with a mistaken interpretation of what these policy revisions will accomplish.
In defining the reasons that faculty can immediately be fired, the current rules limit termination to a “faculty member [who] lacks the ability or willingness to perform his or her duties,” and then some examples are given.
The new proposal keeps the current definition, discards the examples, and then creates a wholly new set of additional reasons for firing. To be clear, these aren’t examples (which, of course, are limited by the definition). Instead, these are additional reasons to fire. These new terminable offenses include “unwillingness to work productively with colleagues.” As the FAQ explains later, part of the definition of “working productively” does not include someone who is “uncooperative.” That’s not even befitting the University of the Soviet Union, much less the University of Arkansas.

Moreover, even if the dubious claim of the attorneys for the university that these are just examples were true, there’s no way that “unwillingness to work productively with colleagues” could have been included in the current definition of cause to terminate. It leads one to believe that these attorneys wrote this to expand control over professors who dare to speak out in ways that upset the administration. The bottom line is that the new proposal makes it much easier to fire a tenured professor on the basis of, essentially, political disagreement.

A friend of the Arkansas Project, Bowen law professor Robert Steinbuch, tells us that a “variety of the University Counsel’s statements in their FAQ are not only simply inaccurate, they seem designed to mislead. I would fail the FAQ on candor grounds alone, not to mention the legal analysis. I have no doubt that this proposal is designed to quash criticism. These same attorneys have already said that university employees have no whistleblower rights. It’s amazing how brazen they are in trying to shut down discussion. This kind of behavior often allows wrongdoing to mushroom, and when it comes out, it’s really, really bad.”

His colleague, Joshua Silverstein, echoes these complaints. In written testimony about the policy revisions, he noted that “collegiality requirements have no place in tenure decisions. Such requirements have a long and documented history of abuse in academic settings.”

Pete Tschumi, an instructor at the University of Arkansas Little Rock, expresses concern that these new policies will harm the intellectual environment:

I am concerned that the public may miss the biggest concern: namely, the long-term consequences to the quality of the higher education students receive and its impact on the state. Surveys of business show they want employees, who are good problem solvers. Developing critical thinking skills in students is hard to do. One must challenge students – push them to gather data and evaluate its validity, approach problems using various models or points of view, and employ rigorous reasoning. Students tend to push back including complaining about faculty to administrators. Some faculty may stand up to strong pressure but faculty are human. Many, when faced with the choice of standing up and having their family’s future threatened or yielding and protecting their family, will choose to protect their family. As a result, over time standards erode more and more. The proposed changes are a recipe for mediocrity or worse.

This policy change is not a minor one. It is likely to have far-reaching effects that would undermine both the freedom of faculty to speak out as well as the quality of education that students receive. Is this the type of change that the university system should be embracing?