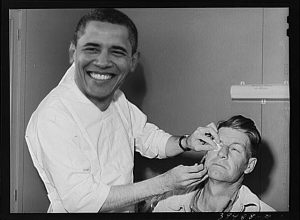 Did you know there’s a more unconstitutional provision of Obamacare than healthcare exchanges?  It’s called the Independent Payment Advisory Board (IPAB).  Don’t take my word for it, read it yourself from Cato’s Michael F. Cannon:

IPAB consists of up to 15 unelected government “experts.” Its stated purpose is to restrain Medicare spending. If projected spending exceeds certain targets, Obamacare requires IPAB to issue “legislative proposals” to reduce future spending. Those proposals could include drastic cuts that jeopardize seniors’ access to care, leading some critics to label IPAB a “death panel.”

The really dangerous part is that these are not mere “proposals.” Obamacare requires the secretary of Health and Human Services to implement them — which means they become law automatically — unless Congress takes certain steps to head them off. Congress may replace the Board’s proposal with its own cuts, at least initially. But Obamacare requires a three-fifths vote in the Senate to pass any replacement that spends more than the Board’s proposal. In other words, to override IPAB’s proposal completely, opponents must assemble a simple majority in the House and a three-fifths majority in the Senate and the president’s signature.

This is truly alarming news for freedom.

I encourage you to check out Cannon and Diane Cohen’s full analysis at National Review Online.

One thought on “Obamacare’s Super-Legislature”