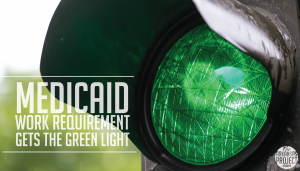 Governor Asa Hutchinson scored a big win yesterday when the Trump Administration approved state plans to impose a work requirement on its Medicaid expansion population, those covered by the Arkansas Works program. This is a key part of Gov. Hutchinson’s efforts to sell his Medicaid expansion – which originated in Obamacare — as a “conservative” health care effort.

According to the governor’s office, here are the details of the work requirement:

Arkansas Works enrollees who are 19 to 49 years old will be subject to the work requirement.  The requirement will be phased in on the 30-49 year-olds first over a four-month period between June and September of 2018.  Individuals subject to the work or community engagement requirement must report 80 hours of work activity every month or show that they are exempt from reporting work activities. A work activity can include a job, job training, job searching, school, health education classes, or volunteering/community engagement (or a combination of any of these for a total of 80 hours). Activity must be reported online at www.access.arkansas.gov.  If an enrollee fails to meet the work or community engagement requirement for any three months in a calendar year, he or she will lose Arkansas Works coverage for the remainder of that calendar year.

An enrollee is considered exempt if he or she is medically frail, exempt from SNAP work requirement, receives TEA assistance, pregnant, caring for an incapacitated person, short-term incapacitated, in substance abuse treatment or full-time education, has a minor child in his/her home or already works at least 80 hours a month.

The Trump Administration did not approve the governor’s plan to reduce eligibility in the program, but it did not reject it, either. Currently, non-disabled, childless adults are eligible under Obamacare to receive Medicaid if they live households with incomes up to 138% of the federal poverty level. Gov. Hutchinson would like to reduce that eligibility cap to 100% of the federal poverty level. An eligibility requirement is a more effective way to contain Medicaid’s long-run costs, so this determination will be more consequential than the decision about the work requirement. We have to wait and see what happens with this idea until the federal Department of Health and Human Services renders a decision.

Arkansas Works is still a flawed program. However, the approval of a work requirement makes it better. Honestly, I didn’t think that the federal government would ever approve something like this for Arkansas. It will be very interesting to see how the state administers it. We’ll certainly be watching to see if the reality of Arkansas Works lives up to the rosy promises made by its supporters. I’m still skeptical, but this latest news is a step in the right direction.

One thought on “Medicaid Work Requirement Gets Green Light”