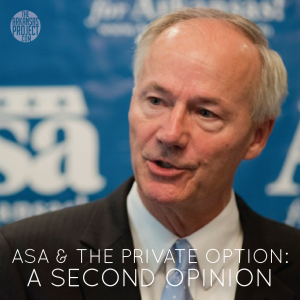 A few hours ago, ace Arkansas Project reporter Caleb Taylor posted his opinion about Hutchinson’s private option speech. Here’s mine.
Governor Hutchinson got dealt a bad hand when he was sworn into office — as a practical and political matter, he owns and bears responsibility for a large part of the future of the private option. If Arkansas legislators respect the governor’s wishes, the private option will end (assuming I understand the governor’s speech correctly) as of December 31, 2016. Then the private option will be replaced by, as I understand it, something like a program that is significantly smaller in scope which devotes its resources to the truly needy.
Hutchinson also called for the formation of a task force to reform Arkansas’s Medicaid program, which I anticipate will result in a special session in 2016. One danger of such a special session is that it might result in a rebirth of the private option — or the birth of something else that isn’t much better — so conservatives will need to monitor that entire reform process carefully.
The Hutchinson timetable, with its end-of-year 2016 deadline, appears artfully designed to foil big-government advocates who want to extend the private option as is. There is no way to extend it past 2016 under this plan unless it takes place in the next few months (during the regular session), during the 2017 budget session (which ordinarily does not take up policy matters), or during a special session. If Governor Hutchinson wants this program to terminate at the end of next year, it is within his power to ensure that happens, and I trust that he’ll carry out that agenda.
Over the last year, Arkansas has seen one private-option failure after another. The health independence accounts it produced for private-option enrollees have nothing to do with the health savings accounts we were promised — instead, the health independence accounts are simply another welfare subsidy. The number of enrollees is far greater than predicted, which poses large political and financial problems. Every month, the private option goes over budget and costs taxpayers far more than predicted, demonstrating that the rhetoric of savings and market-oriented reforms that private-option advocates promised was a snare and an illusion.
I respect the difficulties that Governor Hutchinson faces, and I appreciate his intimations that we are approaching an end to the private option. I am less enthusiastic about the latter part of his speech, in which he went into some detail about the encouraging language he received from the federal government — which consisted of vague representations about the importance of cooperating on health care reform. If we have learned anything from the Obama Administration, it is that its staff isn’t shy about using encouraging language that is entirely disconnected from substantive policy choices. I have a great deal of confidence in Governor Hutchinson’s commitment to improving our Medicaid system and shaking free of the gigantic liabilities that the long-term continuation of the private option would ensure. I have much less confidence in the cooperation of the Obama Administration, and I worry that Governor Hutchinson makes a mistake when he demonstrates that kind of confidence in the federal government.
From the perspective of a fiscal conservative, Arkansas remains in an environment of policy failure and broken promises, where the only substantive private-option improvement we can be proud of is, apparently, years away in the future. But I am confident in Governor Hutchinson’s integrity, and I look forward to his following through on ending the private option over the next two years.

One thought on “Hutchinson's Private Option Speech: A Second Opinion”