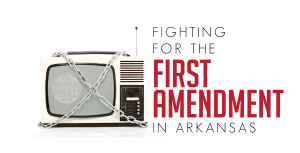 It’s campaign season. That means people are going to be saying negative things about candidates running for office. To those running, this isn’t fun. They hear all kinds of things about themselves that are negative and, maybe, not true. But that is the cost of being a candidate. They can’t just go and ask the courts to stop people from negative campaigning. After all, that would be a violation of the First Amendment, right?
Not according to Justice Courtney Goodson and Circuit Court Judge Doug Martin. As you may remember, Justice Goodson was upset over some attack ads prior to the primary. Her legal team convinced Judge Martin to issue a restraining order to prevent those ads from airing. Now Tegna, Inc., which owned one of the stations affected by this order, has filed a brief in its appeal of that ruling.

As reported by the Democrat-Gazette, Tegna’s attorney writes, “By granting Goodson’s request for a preliminary injunction, the Circuit Court silences campaign speech in the critical days before the election.” The attorney notes that if this decision stands, it “will result in a biennial flood of defamation suits from aggrieved political candidates across Arkansas, who will follow Goodson’s lead and sue the press to silence speech harmful to their campaign.”
He gets an A+ for understanding the Constitution. Justice’s Goodson’s attorneys do not, as this part of the story from the Democrat-Gazette illustrates:

Lauren Hoover, an attorney for Goodson, said Monday that the ads were not only unfair, they were false. The U.S. Supreme Court, she said, has also recognized the differences between nonpartisan judicial races and partisan campaigns. Hoover’s reply brief is due in a month.

“What Tegna doesn’t understand is there are political ads within the range of fair play,” Hoover said. “You can’t just go out and lie.”

There are a few things wrong with Hoover’s statement. For one, there is no agreement that what was being said in the ad was a “lie.” As discussed in TAP’s previous blog post on this, there is significant factual disagreement on what Justice Goodson did and how these ads reported her actions. One could disagree with how the ads characterized Justice Goodson’s actions, but it is difficult or impossible to defend the proposition that the ads contain lies.

A hearing is necessary to help settle this dispute. In this case, however, the judge did not do that. Instead, Judge Martin issued a restraining order. As I wrote at the time:

It’s flatly unconstitutional for a court to issue a speech-restraining order before (at the very least) some kind of hearing. A court that issued such a hearing would be violating both free speech rights and the right to the due process of law. It isn’t just lawyers who are aware that prior restraint is constitutionally indefensible…

If Hoover is right and these statements are lies and, thus, in her view, should not be aired, then it is up to Hoover to prove that: it isn’t enough for her just to make accusations. The presumption under the First Amendment is that speech should be free. It is the burden of those who want to shut down speech to prove why that speech should not be allowed. A judge who issues a restraining order after hearing only one side of the case is showing gross ignorance of the Constitution and case law.

To delve a bit deeper, the assertion that “you can’t just go out and lie” on political ads is one that is very questionable. Ohio had a law for four decades that codified this principle. A federal appeals court struck it down, ruling that “Ohio’s political false-statements laws are content-based restrictions targeting core political speech that are not narrowly tailored to serve the state’s admittedly compelling interest in  conducting fair elections.”
Now, certainly, it is impermissible for someone to libel Justice Goodson or anyone else. If these statements meet the definition of libel, then Justice Goodson could indeed sue. But that is an incredibly high bar for a public figure like Goodson to meet. The very slight potential for Justice Goodson to prevail in a libel lawsuit in no way justifies Judge Martin’s decision to infringe upon these stations’ First Amendment rights.

Justice Goodson’s suit and Judge Martin’s restraining order are an embarrassment to the legal profession. It’s good to see someone fighting back against their blatant disregard for the First Amendment.