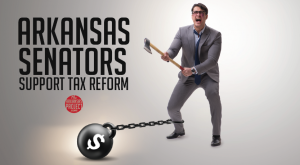 At 2 a.m. on the morning of Saturday, December 2, Arkansas Senators Tom Cotton and John Boozman joined all but one of their Republican colleagues in voting for a bill that makes some major changes to our tax code.

What’s in the bill? Among other things, it:

The bill also includes a repeal of the Obamacare individual health insurance mandate, something that Senator Cotton has been especially active in pushing for.

As you may expect, Arkansas’s two senators were happy with this bill. Senator Cotton released this statement after the bill’s passage:

The bill we passed tonight puts us one step closer to bringing tax relief to working families. It will let Arkansans keep more of their hard-earned money and help our businesses create more jobs. It’s just what we need to make our economy grow faster. I’m also pleased this bill includes my proposal to repeal the Obamacare individual-mandate tax. This is the cruelest part of that hated law. It punishes over 65,000 Arkansas families and the poor for being unable to afford the insurance that Obamacare itself made unaffordable. Its repeal is long overdue, and I urge the conference committee to include this provision in the final bill.

Here is what Senator John Boozman had to say:

Today’s vote brings us one step closer to historic tax relief for Arkansans while encouraging investment that will help grow the Natural State’s economy. It’s all about helping hardworking Arkansans keep more of their money in their own pockets, not Uncle Sam’s.

Passage of the Senate bill is a great step toward finally having an efficient and effective tax code that works for the American people by doubling the standard deduction, lowering rates and eliminating loopholes.

This tax bill differs in some key ways from the tax bill passed by the House of Representatives. These differences must be resolved through a conference committee of members from both houses of Congress. Then the two bodies must pass the same version of the final bill. Alternatively, the House of Representatives could simply pass the Senate bill. Both options are being discussed. There is significant support among the GOP caucus in both the House and Senate to pass tax reform legislation, so these differences are very likely to be resolved soon.

Is this tax reform bill perfect? No, not by a long shot. It falls short of ideal tax reform, where rates would be lowered and special interest deductions reduced or eliminated. This bill still retains plenty of giveaways to special interests. It does little to simplify the tax code. It will also increase the deficit unless Congress and the president enact corresponding spending cuts.

Given that ideal tax reform is impossible given the realities of Washington, D.C., this tax bill is actually fairly decent. Cutting the corporate income tax is something where there is bipartisan agreement. Lowering income tax rates is generally a good idea. The increase in the standard deduction will provide middle class tax relief. A conference committee can conceivably make this bill even better. However, if Republicans in Congress do not move to cut spending after they cut taxes, then any rhetoric about their concern for the deficit is hollow.

Tax reform is a good first step to put DC’s fiscal house in order, but spending reform must follow.