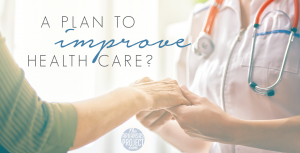 I think most people would agree that, regardless of where you stand on the Affordable Care Act (“Obamacare”), the U.S. health care system does not work very well. As I discussed in my previous blog post, Obamacare may have provided some help to low-income Americans in obtaining health coverage, but it has hurt middle-income Americans.

At some point, there will need to be new health care legislation to deal with these problems. Progressive politicians will be pushing for a single-payer system (what we used to call “socialized medicine”). They are already backing a proposal called “Medicare for All” that would not only be hugely expensive but would outlaw your ability to buy most forms of private health insurance. The one advantage it has is that it offers a plan that would ostensibly “fix” the myriad health care ills that confront many Americans on a daily basis.

Obviously, those of us who value individual liberty, fiscal responsibility, and the free market need an alternative. There have been plenty of conservative health care plans in the wake of Obamacare’s passage, but none of them have gained traction. A new proposal shows some promise, however.

As outlined in a Heritage Foundation paper, the Health Care Choices Proposal would:

Under the block grant, states could design a program for high-risk individuals to use federal funds to subsidize health insurance and allow individuals who qualify for Medicaid to purchase private coverage.

According to the Heritage Foundation’s analysts, this plan would give consumers far more power over their health care than they have under Obamacare:

Under the ACA, individuals and families are constrained by law and regulation in their choices of the kinds of health plans, benefits, benefit designs, or coverage levels. Under this proposal, individuals currently subsidized by Medicaid and CHIP would gain new freedom to direct the subsidy to the private coverage of their own choice. While states would be free to use the block grant to design their own state programs, if an individual was unhappy with the coverage option or options offered by the state using its grant funding, she would have the ability to take the value of her state subsidy and apply it toward any private coverage for which she was otherwise eligible, such as a plan offered by an insurer, an employer, or an association, including health plans sponsored by professional or faith-based organizations, or health plans that included a direct primary care component.

While the plan is not perfect (for instance, it relies on current Obamacare financing to fund the state block grants), it would certainly be an improvement over the current system. States would have an incentive to innovate in health coverage delivery. That would allow Arkansas policymakers to design a system that works for this state, something that is far better for the state’s residents than the numerous federal mandates that Obamacare imposed.

It is likely that health care will be a big issue in the new Congress next year. Democrats feel that this is a winning issue for them. The Health Care Choices Proposal is a good blueprint for a conservative alternative to both Obamacare and Medicare for All.