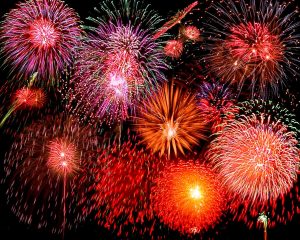 When the Arkansas Times reported this morning that taxpayer dollars were being used to put on a fireworks show in Saline County, the one hosted by the Saline County TEA Party, the Saline County GOP Committee, and State Senator Jeremy Hutchinson, this set off some fireworks of its own. Since then, the Times confirmed that tax money — $5,000, at least — is being spent to put on the event: it’s funded through a grant from the Central Arkansas Planning and Development District. According to the Times, this group received all of Senator Hutchinson’s “General Improvement Funds,” or GIF funds, from the recent legislative session — a whopping total of $1 million. According to the Times, Hutchinson contacted the District and requested that they send this $5,000 for the fireworks show.

I suspected there was more to this story, so I contacted Saline County TEA Party Chairman Ed Hairston who gave me some background information on how this all started:

We were in a Saturday morning breakfast meeting four or five weeks ago. One of the city aldermen was there and the city has always had this fireworks display in the past, every year with taxpayer money. The city has paid for it with taxpayer money all the time. One of the city aldermen — he’s a member — he informed us that the city was not going to have a fireworks display this year on the 4th. They were going to have a bigger one on Labor Day. I made the comment, ‘Why doesn’t the TEA Party jump in and raise some money and we’ll have a fireworks display?’ And Jeremy Hutchinson was sitting at the table and he said ‘Well I can get you $5,000 bucks for a donation. Let me check and make sure I can get it.’ Well I never heard from Jeremy anymore. I emailed him a couple of times and left messages and he didn’t call me back.

Then the city alderman — Kerry Murphy — he called me and said, ‘We’ve got the Saline County Republican Party involved and they’re going to donate $3,000.’ I told him, I said ‘We don’t have that kind of money.’

Then he called me back and said, ‘Yeah, we got the money.’ I said, ‘Well, we’ll donate something.’ We passed the hat and we threw in $500. I’ve been really upset with the whole thing ever since because what we had planned on doing if we could come up with money on our own was to have it open to all politicians and have some old stump-style speeches and have a booth and cook hotdogs and hamburgers. Well it turns out that the alderman didn’t want to do any of that so I sent an email out yesterday or the day before talking about getting petitions signed. Well yesterday morning the alderman called me and said ‘You can’t do petitions. We’re not going to do anything political because they may not let us do this next year.’ I told him, ‘Under the circumstances, I don’t have any intentions of doing it again if we can’t do what the whole 4th of July is all about.’

Senator Hutchinson told me he did in fact send a letter to the commission requesting a grant for the fireworks show and, if it was GIF money, it was GIF money left over from last fiscal year. When I asked him to explain the source of the funds, he told me:

I’m not sure. It’s money from, I mean, it’s not from GIF from this year. The fiscal year didn’t start until yesterday and this was awarded last fiscal year, back in June. It’s money that Central Planning commission had. I don’t know what the source of it was. I’m guessing — and I’m just guessing — it’s probably unspent GIF money from last year. But I’m not positive of that…

I did this without any knowledge that the Republican Party or the TEA Party were even going to be sponsors. I talked to not only Kerry but a bunch of other people who were disappointed that there wouldn’t be fireworks and this is economic development loss to the community and people from Traskwood and Haskell who always come into Benton for the 4th of July for these fireworks wouldn’t come and we wouldn’t get their money. And that poor people can’t afford fireworks on their own and absent a show by Benton…and they asked me ‘is there anything you can do as a senator?’ I said, ‘Well, I may be able to get some economic development grant money.’ So that’s when I talked to the Central Planning commission and they said that they have some money available and get an application in and I sent a letter of support.

It looks as if the two of them have conflicting memories: Hairston said the fireworks show was his idea and Hutchinson was at the meeting where he presented it, who jumped in and offered to help. But Hutchinson says he didn’t know that the TEA Party or the GOP were going to be sponsors. So I asked the senator if he had talked to the planning commission about the grant before that now-infamous TEA Party meeting:

No, I hadn’t talked to them specifically about that. I had talked about grant money that’s available from last year’s reserves so I knew there’s some money over there and they’re looking for ways to spend it. Again, I said, ‘I couldn’t guarantee you, but I think I can.’ So I mentioned that to Ed and them. So, that’s probably true. I didn’t go into detail, I know, about where the money’s coming from or how. I said, ‘I think I can get $5,000 but that still leaves us short.’ So they were going to start working on coming up with the difference.

Notably, Hairston says Hutchinson offered to get him a $5,000 “donation.” It may seem nit-picky to dissect the senator’s word choice, but there’s a significant difference between taxpayer dollars that are taken by force (state money) and taxpayer dollars that are given by choice (true donations). I asked Hutchinson if that’s how it was presented or if this was simply a misunderstanding:

I remember that meeting and that was after I had already talked to the other people and so I said that I tried to get a…I don’t know if I said dona–…I don’t know what word I used. But I’m sure he understood that to be…but, I guess that’s a misunderstanding then if that’s the case. I just said ‘I think I can getcha $5,000.’ I didn’t go into detail…

Senator Hutchinson also explained how sponsorships generally work. Speaking of the TEA Party and the GOP Committee, he said:

The difference is that when businesses or candidates sponsor events to foster this good will, they do it with money entrusted to them personally that they acquired freely, as a way to say thanks to their communities for their patronage and support. Senator Hutchinson, on the other hand, is using our money. If this is true, it doesn’t look as if it’s accurate to say that Senator Hutchinson is a cosponsor of the Saline County fireworks show. Rather, it looks more like every Arkansas taxpayer is an unwitting and involuntary cosponsor — or, more precisely, donor.

6 thoughts on “Your Taxes Bursting In Air, Gave Proof Through the Night That the Pork Was Still There”