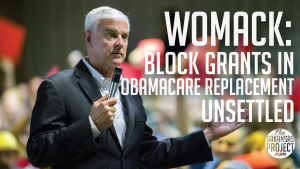 The Congress struggles with “How do you provide a healthcare system in a country like America, without basically bankrupting the government?”, because healthcare is a very expensive proposition. One of those ideas is devolving some of those decisions made at the federal level and passing them back down to the states, where there is a much better connection between the people and the leaders of those states.The block grant proposal on Medicaid is one of those.

Whether the block grant program will be mandated by Congress is still unsettled. Right now, I think the proposal is to give states the option of taking a block grant or some per-capita number from the Congress in order to meet the Medicaid population needs of the country.

Asa Hutchinson has previously expressed support for a “broad block grant-like waiver” to replace Obamacare. President Donald Trump said during the campaign that he would be for giving states more flexibility to oversee their Medicaid programs by allowing for block grants.

Block grants, in theory, would allow each state to have more flexibility in their use of federal funding to serve their Medicaid populations.

Under the current funding system, most decisions about how Medicaid funds are spent are dictated by rules made in Washington D.C.

Womack also spoke about the urgency of reforming entitlement programs like Medicaid, Medicare, and Social Security in order to avoid harsher budget pain in the future.

Open-ended entitlement programs in this country are bankrupting this country. In 2040…81 percent of federal revenues will be taken by all of the social safety net programs and the net interest on the debt based on the current law. Whether or not we block grant money to states or give states the opportunity to accept block grants so that they can administer these programs free of a lot of federal government interference, and do it for the people that they consider to be the most vulnerable in their society…at this stage, given the financial condition of the United States of America, if we don’t do something about open-ended entitlement programs, there’s not going to be much money left for all the other things a lot of you in this room would consider vitally important to the future of this country.