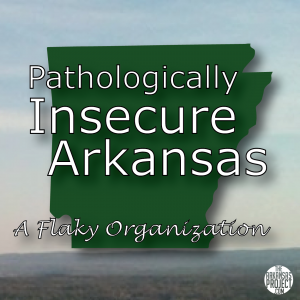 As we noted recently, opponents of tort reform don’t bother to wait for evidence before they insist that those they disagree with have broken the law.
The (misnamed) Secure Arkansas group took a break last week from conspiracy theorizing about fluoride in the water to send out a paranoid e-mail about the upcoming debate on tort reform in Arkansas.
Here’s what Secure Arkansas wrote about tort reformers:

Not only are they bending the rules to secure special privileges for the industry as a whole, but the kingpin of the nursing home industry, Michael Morton, leads this charge.  His political donations are enormous, and his political power is mighty.  And while he is currently mired in a shameful scandal of bribing a judge, his efforts to make his own rules have not been stalled a bit.  He doesn’t just think he’s above the law – he thinks he’s above the Constitution!  Instead of distancing themselves from a man involved in such nefarious behavior, some of our senators are moving mountains to break all the rules.  How far will these senators go to serve this man and give him special privileges?

Such unrestrained, guilt-presuming rhetoric has been pretty common in recent weeks, as our Marc Kilmer noted recently.
We certainly appreciate that Secure Arkansas has the right to issue any opinion it wants (even if it apparently doesn’t have any staff members who are willing to sign their names or otherwise take responsibility for what they say). We’d just prefer that their opinions have some basis in fact. In that context, the unique disclaimer at the end of every one of Secure Arkansas’s emails is notable:

We make an effort to ensure that the information found in our emails/alerts and on our websites is accurate and timely, but we can’t and don’t guarantee that.

I agree with that disclaimer, because there is absolutely no way to guarantee some of the false information that Secure Arkansas produces.
Regrettably, the desire to declare enemies guilty without a trial continues to spread. The Blue Hog Report, the error-filled blog run by left-wing attorney Matt Campbell, continued in the same vein last week. Campbell mentioned “the likely-to-be-indicted Michael Morton,” but didn’t provide anything to back up this remarkable accusation. To be more precise: he doesn’t, because he can’t.
Why would he? When it comes to political activists who want to bash successful businessmen, all that matters, apparently, is our emotional reaction toward our enemies. No evidence is needed.
It’s worth noting that a consistent theme of the reactionary defenders of Arkansas’s current civil justice system — that preserving fairness in Arkansas’s civil justice system is so important that constant vigilance is required to oppose those who might change it — is very hard to reconcile with their apparent eagerness to convict their ideological opponents without a trial. Why, it’s almost as if the concern these political activists express about fairness is just a mask for something else.

One thought on “Why Wait For Any Evidence? Pathologically Insecure Arkansas Edition”