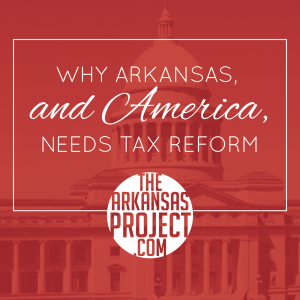 Now that the election is over, it’s time to think about what all these people who will be representing us should actually do once they get sworn into office in Little Rock or Washington, D.C. One of the state’s, and nation’s, most urgent needs is tax reform. The state tax code and the federal tax code are riddled with inefficient tax expenditures, too many brackets, and high marginal tax rates. It’s time to change that.
Arkansas saw some tax relief from the 2013 legislative session. The .1% cut to income tax brackets was good as far as it went, but it wasn’t really tax reform. It left the tax code with a variety of special-interest tax breaks. These deductions and credits, many of which should really be termed “tax expenditures,” benefit well-connected industries at the expense of the rest of the state’s taxpayers. For instance, why does Delta geotourism get a tax break, but other tourism does not? You get a special tax break for coal mining, but not for logging. These narrowly-targeted breaks make no economic sense.
In 1986, the U.S. Congress worked with President Reagan to eliminate similar federal tax breaks. When they did that, it freed up revenue that they used to eliminate tax brackets and cut marginal tax rates. Arkansas lawmakers should do the same: take away special-interest tax provisions and give a real tax break to all the state’s taxpayers.
Although the U.S. tax code was reformed in 1986, the beneficial things accomplished by that reform (eliminating narrow tax breaks, reducing brackets, and cutting marginal tax rates) have been undone over the past three decades. The federal tax code is, once again, riddled with a number of tax provisions enacted at the behest of corporate lobbyists and other special interest groups. Members of Congress and presidents have repeatedly increased tax rates. The beneficial results of the 1986 tax reform, greater economic growth and more federal revenue, have been cast aside in order to promote special-interest politics.
Now is the time to reject the political considerations that have gummed up our tax codes with provisions that benefit the few at the expense of the many. It’s time to enact tax policy that promotes broad economic growth, not narrowly-targeted job creation for politically-connected industries. Since 2008, we’ve seen how this type of tax-code tinkering at the federal level has worked: poorly. It’s time to try something different.
Giving up tax breaks for the few — and getting lower rates for the many — is what both Democrats and Republicans decided to do in 1986 at the federal level. It was a success then, and it can be a success again.
P.S. Don’t forget! Tax reform is one of the “Three Big Ideas” that we’ll discuss at the AAI forum at noon tomorrow. The speaker on tax reform will be UALR law professor Phil Oliver, whom AAI President Dan Greenberg has been heard to describe as “my favorite law professor of all.” Please join us for a triad of interesting speakers, big ideas, and a free lunch: what more could you ask for? Click here for more details and to register – we look forward to seeing you tomorrow.