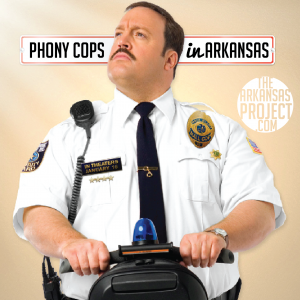 We often write about Arkansas’s out-of-control desire to license and regulate more and more businesses. Just last week, we wrote about the ingenious folks at the state Board of Health, who have been trying to force hair braiders to take a thousand hours of useless classes before they’re permitted to braid the hair of a single customer. (Last week, the Board of Health — in the face of a lawsuit by hair braiders — folded.)
However, we want to make one thing clear: we’re very much in favor of regulating cops. Law enforcement officers in Arkansas need to be regulated and controlled by our state government.
This might strike you as common sense, but common sense is not so common: today we’d like to introduce you to the pretend cops at the Arkansas Professional Bail Bondsman Licensing Board.
According to e-mails obtained from a citizen’s FOIA request, it looks like the licensing board has been running a pretend law enforcement agency since 2005.
Brian Marshall, Deputy Director of the Office of Law Enforcement, wrote in a letter to the Arkansas Professional Bail Bondsman Licensing Board last week:

In a follow-up interview with The Arkansas Project, Marshall said it was the first time he could recall having to send a letter to a state agency reminding them they weren’t a law enforcement agency and therefore shouldn’t be exercising law enforcement powers.
Marshall said:

I’ve asked two officials of the Arkansas Professional Bail Bondsman Licensing Board for comment. So far I’ve received no response, but we’ll have more to say about this highly unusual situation in the near future.
(Here’s a taste of coming attractions: it looks like it might be lots of fun for pretend cops to attend law enforcement conferences on the taxpayer’s dime.)
For now, I’ll just close by saying that the fact that the people entrusted with enforcing state government’s laws and regulations can’t be trusted to adhere to those same laws and regulations is a great argument for rolling back the amount of power these bureaucrats have over private citizens and business owners.

5 thoughts on “Who Will Regulate the Regulators?”