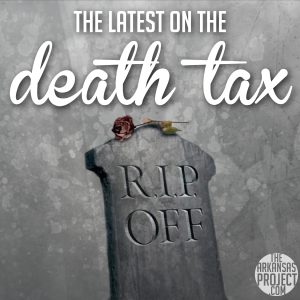 Of all the taxes that government imposes, perhaps none is more offensive than the federal Estate Tax, commonly referred to as the “Death Tax.” This tax targets the money or property that the federal government thinks it is entitled to, despite the fact that the accumulated capital has already been taxed multiple times by multiple levels of government. Because grieving over lost loved ones is apparently not quite enough pain, the government comes in and seizes another chunk of your property. And, as an added bonus, you get to fill out this 30-page form to send in with your check. What a deal!
Recently, the Death Tax has taken center stage in the U.S Senate race between Senator Mark Pryor and Congressman Tom Cotton. Last week, Rep. Cotton was recognized by the 60 Plus Association, an advocacy group for seniors: 60 Plus gave Cotton the “Benjamin Franklin Award” for pledging to work for the repeal of the Death Tax. According to the group’s chairman, “the Death Tax is as bad as they come.”
In a statement announcing the award, Cotton’s campaign reminded Arkansans about Pryor’s inconsistent track record on the issue:

Washington has enough politicians who say one thing and do another. Senator Pryor was right in 2002 when he promised to eliminate the death tax, but in the years since, he has turned his back on Arkansans, breaking his promise by voting 12 times to block either an elimination of the death tax or a reduction in the size of the tax. I’ll work to repeal this job-killing tax and I thank The 60 Plus Association for this award.

(View Cotton’s statement, and a list of citations for Pryor’s votes, here.)
In addition, the Cotton camp linked to this video of Senator Pryor during his 2002 campaign for Senate, in which he announced his support for eliminating the Death Tax.
But that’s not necessarily a fair categorization of what Pryor said, according to Pryor’s Deputy Campaign Manager Erik Dorey. In a statement to The Arkansas Project, Dorey said Pryor’s commitment was confined to helping “small businesses and family farms” obtain relief from the confiscatory Death Tax, not all Arkansans. Dorey also argued that Pryor has almost completed this goal. According to Dorey’s statement (who cited the IRS), significantly less Arkansans are paying the Death Tax than they were in 2001:

Actually, what Sen. Pryor campaigned on in 2002 was exempting “small businesses and family farms” from paying the estate tax. When he was running in 2001, the estate tax rate was 45% with a $1 million exemption. Now it’s a lower rate with a significantly higher exemption threshold. As a result, the number of Arkansans paying the estate tax has dropped from 217 when Mark took office to 19 in Arkansas at last count. Of those 19, estimates are that maybe one estate would qualify as a “small business or family farm.” And Mark supports lowering the rate even further, in fact he opposed President Obama in 2012 when a higher rate was proposed.

Currently, the Death Tax rate is 40% with an exemption of $5 million for an individual.
When asked for examples of how Pryor “opposed President Obama in 2012,” Dorey referenced this Wall Street Journal story: it describes Pryor as “preferring not” to raise the Death Tax, although it says nothing about a fight against Obama or a fight to eliminate the Death Tax. In fact, Pryor is quoted by WSJ as saying he liked the Death Tax the way it was; Politico featured a similar quote, with Pryor citing the need for “stability” in the tax code. Maybe Pryor was earnestly fighting Obama behind the scenes — despite the lack of evidence — but wasn’t Pryor’s initial campaign promise to eliminate the tax altogether (even if it was just for “small businesses and family farms,” as Dorey says)?
I asked Dorey twice where Pryor currently stands on actually eliminating the Death Tax — for small businesses, family farmers, or anyone else. Dorey did not answer directly, but said Pryor “supports reducing the rate further.” So far, I have not received a response to my inquiry asking exactly how much in reductions that Pryor would support. Dorey also added that, because of Pryor’s work, the tax has been “effectively eliminated.”
I also asked for specific examples of how Pryor had worked to lower the rates. Dorey passed along the same WSJ article and statements from two special interest groups who thanked Pryor for his position on lowering the Death Tax (although both statements, one from 2009, were in response to votes on temporary reductions). Pryor certainly deserves some credit for how he ultimately voted: furthermore, to his credit, he did co-sponsor the 2012 bill (assuming the Farm Bureau’s account here is accurate). Nonetheless, I see little evidence that Pryor has spent any significant amount of time or political capital advocating for a significant, permanent reduction in the Death Tax, or that he has worked to kill it once and for all — which is what he committed to do in his first Senate campaign.
[A side note here: I appreciate Dorey actually being willing to field questions from a conservative journalist like me. That takes a lot of courage — more than even some Arkansas Republicans have.]
Furthermore, “effectively eliminating” is quite different than actually eliminating a tax, which is what Mark Pryor said he wanted to do in 2002, and he hasn’t done it — not for “small businesses and family farms,” or anyone else. In fact, unless I missed something, I don’t believe Pryor has even tried. And the reduction in the number of Arkansans paying the Death Tax could be explained by the aftermath of the Great Recession (people have less) or, as Milton Friedman once predicted, by the fact that people are “dissipating their wealth on high living” to avoid Death Taxes (people are spending more). Neither of these outcomes are good.
The bottom line: the Death Tax lacks any moral or economic justification. It encourages frivolous spending; it robs Americans of a chance to climb the economic ladder. In fact, a 1994 study by the Tax Foundation found that a 55% estate tax “has roughly the same effect on entrepreneurial incentives as a doubling of income tax rates.” Something tells me that, to those 19 Arkansas families and hundreds of others across the country, this is still a pretty important issue. As Mark Pryor once said, “We need to fix that in Washington.”
As for the question of who wants to kill the Death Tax the most: based on Mark Pryor’s actual voting record, it seems like he’s content to leave this immoral, confiscatory tax on life support. Tom Cotton, on the other hand, looks like he’s ready to pull the plug.

2 thoughts on “Which Candidate For U.S. Senate Wants To Kill The Death Tax The Most?”