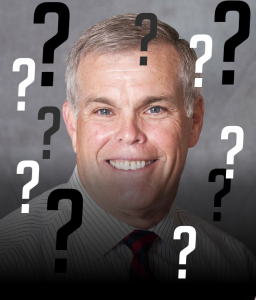 As you probably know, the special Senate election in Jonesboro has been pared down to four candidates — two from each party. On the Republican side, John Cooper and Dan Sullivan have advanced to the November 12 runoff election.

The question of Medicaid expansion in Arkansas (dubbed the ‘private option’) played a central role in the initial primary election. I interviewed all the Republican candidates, asking them whether they would support or oppose this aspect of Obamacare implementation. Cooper consistently told the public that he was against the “PO” in any form and would oppose its funding. Sullivan, on the other hand, was more elusive.

In our September 9th interview, he told me:

“That’s done. And I’m not going to look backwards. I think I’ve found a lot of questions: ‘Would you have voted for it? Would you have voted against it?’ I’m going to look forwards. Uh…we need to advance what we have. We need to move the ball down the field and…trying to figure out how I would’ve made call in the…historically, in the past, doesn’t help us advance the ball.”

Interesting response, but it didn’t really answer my question which was whether he supported or opposed Medicaid expansion in Arkansas.

Later in the primary campaign, in his Family Council Action Committee survey, when asked about the PO, Sullivan selected the answer “Against.” But just two days before the primary, the Arkansas Democrat-Gazette reported:

Sullivan said Friday night that he would call the Family Council this week to clarify that he considers the private option law a poor law, but he is not against following it as a law.

He said he would have to see “some viable options before I would be ready to kill the [private option] program or public funding for the program.

“I haven’t heard what those options are. There may be some,” he said.

Although these statements provide an interesting window into what Sullivan is thinking, they don’t seem to get us any closer to Sullivan’s actual position. Is Sullivan for or against the private option? It’s hard to say.

Hoping to learn more, I contacted Family Council Action Committee to see how Sullivan had updated his answer to their survey. They were aware of Sullivan’s statement in this ADG article, but — despite his comments — they never heard back from him about amending his response.

My guess is that the PO still remains relevant to many Republican primary voters. So, last week, I reached out to Mr. Sullivan again to gain some further understanding of his position.

When I reached Sullivan, he told me that he had time to answer my questions, but that he didn’t want to answer them on the phone — adding that he was happy to answer them, as long as they were in written form. When I asked him why he preferred emailed questions, he said my previous story did not “accurately reflect what he thought.” Therefore, he only felt comfortable conversing with me over email. I was quite startled to hear this, because my previous story consisted of little more than an unedited, word-for-word transcript of our conversation. When I asked him to tell me how my word-for-word transcript had been inaccurate (!), he declined. Once again, I wasn’t really sure what he was saying but, as a courtesy to Sullivan, I typed up my questions and emailed them to him. By late Thursday, since I hadn’t heard from him, I emailed Sullivan and told him I had a story deadline of 1 p.m. on Friday.

Around 8:30 Friday night, I received this response from Sullivan. As you can see, he goes into some detail about how busy he was and how unfair it was of me to have a Friday deadline. I found this startling for many reasons, not the least of which that early voting begins Tuesday — which is to say, just one and a half business days after my deadline. He not only informed me that giving him only 24 hours to respond placed too many burdens on him, but added: “It appears you have an agenda other than reporting factual information about me.”

(Not to beat a dead horse into the ground, but this is not ordinarily an accusation you’d expect to hear from a candidate once you’ve gone to the trouble of typing up a complete 1200-word transcript of his interview.)

Notably absent from Sullivan’s response, however, were his answers to my emailed questions. And in case you’re wondering, those questions were:

1. The ADG reported on Oct. 6th that you said the private option is “a poor law,” but you weren’t against following the law. Forgive me if this sounds silly, but shouldn’t “poor” laws be repealed? Why should we follow “poor” laws?

2. Your Family Council survey says you are against the ‘private option.’ Your comments to the ADG seem to indicate something different. Can you tell me: do you support or oppose the “private option?”

3. Finally, if you’re elected to the Senate, will you vote for or against funding the “private option?”

Do any of these questions strike you as particularly difficult? Do you think they demand hours of research? It’s a shame that Sullivan is acting as if my inquiries, which should not strike an ordinary person as demanding or tricky, should be met with stories of his importance and my impertinence. And while I appreciate that (as Sullivan emphasizes) he is a busy and important person, I doubt that it would have taken more time to answer my questions than to explain in detail why he is too busy to address them. After all, he has been a candidate for several weeks now and has worked as a healthcare lobbyist. Surely he has an opinion that could be summarized in at least as many words. Furthermore, these are far from irrelevant or minor issues: Medicaid expansion is arguably the biggest issue every legislator will face in the 2014 fiscal session.

Although my deadline has already expired, I wrote Sullivan back on Friday night and told him I would be happy to print his answers to my three questions in an upcoming post, whenever he decides to answer them. That still holds. So far, however, it’s Monday and I still have received no response (to questions that were posed on Thursday).

In fairness, I also contacted John Cooper to see if his position on the ‘private option’ had changed at all. He told me plainly:

I am absolutely opposed to it. I will vote to defund it.”

As one of my teachers was fond of saying: compare and contrast.

One thought on “Where Does Dan Sullivan Stand On The “Private Option?””