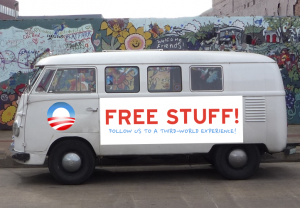 This morning, the Arkansas Legislative Council blocked an additional $4.5 million in pro-Obamacare advertising spending in the state — or did they?
The ALC met to review a contract with Mangan-Holcomb Partners to advertise Obamacare in the state. Through today, only the first phase of the two-phase MHP contract had been implemented — valued at approximately $4.3 million. An effort was undertaken, however, to stop the additional $4.5 million or so in federal grant dollars from being spent. Legislators convened to consider this issue for the second time in recent weeks. Testimony was heard from Surgeon General Joe Thompson, Insurance Commissioner Jay Bradford, Deputy Commissioner of the Arkansas Obamacare Exchange Cynthia Crone, and Mangan-Holcomb CEO David Rainwater.
Over an hour into the meeting, Rep. John Walker asked a very poignant question — as he is prone to do — of Bradford. Could the legislature actually stop the funds from being spent?

I take it that we are simply reviewing this and if you all — if the executive branch decides to continue this, there’s nothing we can really do. I mean, I think…would you opine on that Mr. Bradford?”

I think you are correct, attorney Walker, that it would be a final decision after — hopefully it wouldn’t go that way and you would just review it — but the governor would have the final…he would have the final judgment on whether we go forward or not.”

Rep. John Burris seemed to agree with the Walker-Bradford interpretation of what was being debated:

The reason this came to review is because we are required to review contracts of the administration that they’re entering into. This is not new money, it’s not appropriations, it’s not a grant. It’s old money, already received. We are simply allowed to review the contract.”

Burris continued to say that he wanted to set the record straight when it came to the ads because even though they’re ads to promote Obamacare, they’re not actually saying Obamacare, so it’s almost like they’re not promoting it:

On the ads…I’ve seen some people call it ‘propaganda.’ I would say that the ads we have in Arkansas are probably far less impactful maybe because of the input I and others sought to have because we don’t say ‘health care reform.’ We don’t say ‘subsidies.’ We say ‘Take responsibility for your own healthcare.’ ‘Get in.’ Things of that nature. We’re not actually advertising the law, we’re advertising…we’re not advertising a political campaign because a lot of people like I say, including myself, tried to make sure that wasn’t the case.”

Burris added: “It’s not money promoting Obamacare because we made sure that messaging wasn’t in there.”
Right. Because we all know that when you’re spending millions of taxpayer dollars to enroll people in taxpayer-funded insurance, it’s OK as long as you don’t use the word “subsidy.” But I digress.
The panel ultimately voted to reject the additional advertising spending (you can see the roll call vote here), but the realization that the vote was merely symbolic elicited some anger from conservative members. After the meeting, several of them expressed to me their displeasure that they had been summoned to Little Rock for a “pointless meeting.” Many predicted Governor Beebe would proceed with the funding despite the vote by ALC.
However, just before 3:00 p.m. today, the Associated Press reported that the governor will put the brakes on the advertising campaign. Why? And what’s to happen to the $4.5 million federal dollars that are sitting in the state treasury, dedicated towards pro-Obamacare advertising? At this point, we don’t know. But at least for now it looks like the informational ads about something other than Obamacare insurance will be discontinued.

5 thoughts on “What’s Happening With Obamacare Ad Spending In Arkansas? No One Knows”