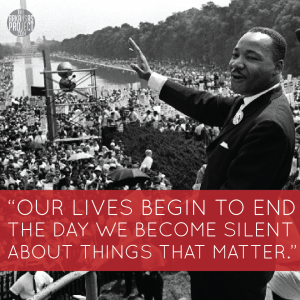 Today is a day to reflect on Martin Luther King Jr. and the lessons we can learn from his legacy.
Two recent articles help us better understand King’s legacy. The first article is a contrarian take from Matthew Rousu over at The Federalist. He says we should honor King by not making it harder for entry-level workers (who are, disproportionately, minorities) to find work through the unintended consequences of minimum-wage increases.
From The Federalist:

A rough definition of the “American Dream” is that any American can rise to a better economic situation by working hard throughout his or her life. The minimum wage is stifling the American Dream for many Americans, but more harshly affects African-Americans. Those who seek to expand opportunities for all Americans should work to abolish the minimum wage.

One could make just the same point, as we have recently, about overzealous occupational licensure.
The second article is a more conventional take on King’s legacy from Jeff Jacoby of the Boston Globe.
From Jacoby:

Whether writing behind bars from a Birmingham jail, or preaching to 250,000 civil rights marchers at the Lincoln Memorial, or accepting the Nobel Peace Prize in the presence of Norway’s royal family, King always located his true north within the American tradition. On the last full day of his life, in the last speech he ever gave, this great American reiterated that those who struggled for black civil rights “were really standing up for the best in the American dream, and taking the whole nation back to those great wells of democracy which were dug deep by the Founding Fathers.”
He was American to his core, not only staking a claim to the American dream, but enriching and expanding it for everyone. With hope and love, with dignity and truth, he said in Memphis, “we, as a people, will get to the Promised Land.”

We don’t agree with every word of these articles, but both of them certainly are worth reading.