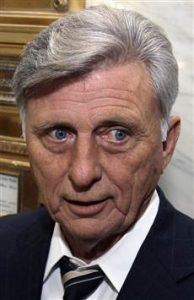 Earlier in the week, State Rep. Ann Clemmer announced her candidacy for Congress. During remarks after her announcement, Clemmer told reporters:

I think that with everything that has gone on in D.C., my expectation is there will be no immediate implementation of the private option. Because there are too many unknowns in D.C., I think the whole thing may be frozen.”

Clemmer attributed the delay rumors to State Senator David Sanders, an architect of the “private option.” But Sanders was quick to disagree:

I’m not aware of any conversations about just delaying it. … I haven’t even contemplated (it). This is the first I’ve heard of this.”

I’ve spent the last few days trying to contact both of these legislators to find out what is really going on here. Surely Clemmer didn’t just imagine that Sanders made these comments? Or perhaps Sanders said something about Obamacare delay, and therefore Clemmer misunderstood him to be talking about the “private option?” (I can’t imagine how she could have made this mistake — because, as we all know, the “private option” has nothing to do with Obamacare.) Both of these legislators are incredibly accessible, and so I’m certain that they’ll be returning my calls shortly.

In a completely unrelated story, this morning the AP reported that Governor Beebe is calling on legislators to renew the funding for the PO:

Beebe said Friday that lawmakers should be aware of the consequences if they don’t approve the funding bill for the state’s private option plan to purchase private insurance using federal Medicaid funds. Lawmakers approved the plan as an alternative to expanding Medicaid.”

Considering that we are still months away from the fiscal session, the tea leaves suggest that 1. There is something to the rumors that the “private option” is a less than permanent fixture in Arkansas and 2. Beebe is nervous about its legislative support.
He should be.

7 thoughts on “Well, The ‘Private Option’ Is In Trouble”