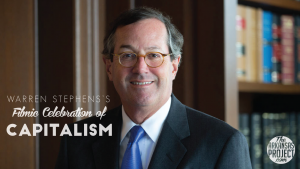 It is unusual for capitalism or capitalists to receive positive portrayals in film. From “It’s a Wonderful Life” to “Wall Street” to “The Lego Movie,” capitalism can’t catch a break from Hollywood.

That’s what Warren Stephens, who is the chairman, president, and CEO of Stephens Inc., wants to change.

He has created a series of short films that are, in his words, “a collection of stories of great American capitalists who embody the values of independence, innovation, and dedication. They inspire us to celebrate capitalism, its inherent social contract, and the good it can do for our society.”
His films can be found on his website www.thisiscapitalism.com.

There are two films on the site now, with four more planned. One of the films available is about Alexander Hamilton, who is well known for his contributions to the formation of America’s capitalist society. The other is the story of Madam C.J. Walker. She was unknown to me until I watched her story and learned that she was the first African American woman to become a self-made millionaire in the United States.

Madam C.J. Walker’s story illustrates the strength of this film series – it uses a biographical sketch to show how the free market system benefits individuals and society. In this case, capitalism allowed an outsider, born just after the time of slavery, to develop a product that met consumers’ needs and to become rich from selling it.

That’s what critics of capitalism don’t understand. They caricature capitalism as exploiting people, but in reality capitalism works through mutually beneficial transactions. In Madam C.J. Walker’s case, she developed hair care products that reversed hair loss in some women. These women were happy to buy her product to look better, and that led to Madam C.J. Walker becoming wealthy.

In capitalism, unless there is force or fraud, then both purchaser and seller participate in mutually beneficial transactions. Along the way, people are put to work and the economy grows.

Hollywood may not understand capitalism enough to get that basic truth across in movies, but Warren Stephens does. As he says, “Capitalism has proven to be unmatched in its power to lift people out of poverty, create jobs, and stabilize communities.”
I’d recommend a visit to www.thisiscapitalism.com. Check out his videos on Madam C.J. Walker and Alexander Hamilton (their running time is less than 4 minutes each). Then return to see the films on Helena Rubinstein, Jack Stephens, Chuck Williams, and Sam Walton when they are done in the next couple of months. You’ll come away a little more knowledgeable about the benefits that capitalism has brought – and will bring – to our society.