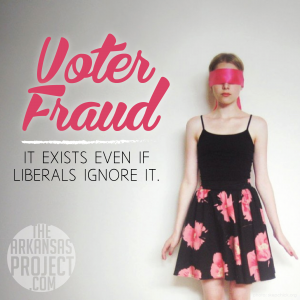 Before you read this story, there is one thing you need to know beyond a shadow of a doubt: voter fraud does not exist. Period. Never has, never will. And like state Senator Uvalde Lindsey once said, voter ID laws are simply “solutions chasing a problem that doesn’t exist.”
With that in mind, I direct your attention to this recent news story out of Wisconsin:

A Shorewood man has been charged with more than a dozen counts of illegal voting, accused of casting multiple ballots in four elections in 2011 and 2012, including five in the 2012 gubernatorial recall.
Robert D. Monroe, 50, used addresses in Shorewood, Milwaukee and Indiana, according to the complaint, and cast some votes in the names of his son and his girlfriend’s son.

And, for the liberals out there anxious to use their tired talking point that “voter ID doesn’t solve the problem because absentee fraud is the real problem!”, be sure to read this relevant section of the news report which details Monroe’s in-person voter fraud:

In the presidential election, Monroe cast an in-person absentee ballot in Shorewood on Nov. 1 and drove a rental car to Lebanon, Ind., where he showed his Indiana driver’s license to vote in person on election day, Nov. 6, the complaint charges.

Last year, 10 other Wisconsinites were charged with voter fraud, with accusations of double voting in some cases.
Wisconsin has a voter ID law on the books, but the law has been intermittently enforced: passed in 2011, the law was temporarily in effect before a stay was issued in 2012. Lower courts have found it to be constitutional, but the law was recently struck down by a federal judge. That ruling is currently being appealed by the state.
These types of voter fraud seem particularly stupid because they’re basically pointless — why would anyone commit voter fraud when there’s no significant chance that it would sway an election? The unfortunate answer is that most criminals are irrational people, which makes the anti-voter ID argument that “voter fraud by impersonation doesn’t need to be legislated against, because nobody would be stupid enough to engage in such risky and pointless behavior” even more irrational.