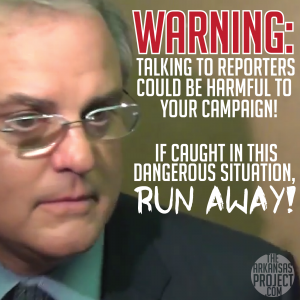 Senator Mark Pryor made a guest appearance in Arkansas today. KATV’s Janelle Lilley caught up with him and asked why he agreed to appear in an October 14th debate in Fayetteville, but hasn’t accepted invitations to appear in other, statewide debates. Lilley’s question was met with a swift rebuke from a Pryor aide who instructed her to direct campaign questions to Pryor campaign spokesman Erik Dorey before rushing Pryor into an elevator, thru the lobby of a gift shop, and across the street, away from reporters.
Lilley also asked Pryor if he would be willing to open the debates to topics other than “transportation, jobs, and education.” Pryor responded by saying, “Well, you know, I talk about all kinds of topics all the time.”
The Tom Cotton for Senate campaign has released this video of the events, which features a deer-in-the-headlights looking senator:

The Pryor campaign accepted an invitation yesterday to debate Congressman Cotton at the Fayetteville Chamber of Commerce, just before early voting begins in October. The Pryor camp also says they accepted an invitation to debate on AETN “weeks ago.” Thus far, no networks have agreed to carry the Fayetteville debate. The AETN debate will obviously be carried by AETN, which has fairly low viewership.
According to a statement from the Cotton campaign, KATV “has been awaiting an answer from Senator Pryor since mid-April when both campaigns were invited.” Cotton’s spokesman David Ray said, “Tom Cotton agreed to the KATV debate over two months ago, but Pryor has so far refused to participate.”
It’s a bit of a mystery why Pryor is selectively choosing which debates he wants to participate in. I can only assume he perceives some debates as better than others for his campaign. But it is just a little embarrassing for Arkansas to have an incumbent U.S. Senator who’s so terrified of reporters. And I just can’t imagine why Pryor isn’t anxious to jump on statewide TV and extol the wonders of the “amazing success story” that he helped create.