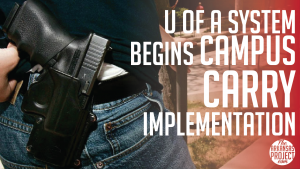 The University of Arkansas System, through its General Counsel, Joann Maxey, recently released a policy statement on the “Campus Carry” law passed by the legislature this year.
Many liberal administrators in Arkansas public universities opposed state Rep. Charlie Collins’s bill that later became the Campus Carry law.  So we were less than optimistic about how the universities would roll out the implementation of the law.
But if the U of A’s policy statement is any indication, they’re off to a great start.

Joann Maxey and her staff did a terrific job with their guidance document.  It is very informative and useful.  I applaud the public service that this provides.

Based on the policy statement released in late April,  the University of Arkansas’s initial interpretation and implementation of the “Campus Carry” law is consistent with legislative intent.

If you don’t want to read the entire document, here are some of the highlights:
With an additional endorsement, concealed carry licensees 21 years or older generally may carry on campus, regardless of status as faculty, staff, student, or other.  There are exceptions (e.g., UAMS, stadiums, and grievance proceedings).

The new laws prohibit an individual from carrying a handgun into grievance and disciplinary meetings conducted in accordance with university procedures and lasting no more than 9 hours provided (a) the meeting is held in a room that is “no larger than necessary to complete the meeting;” (b) the individual is given at least 24 hours notice of the meeting; and (c) a notice is posted on the door in which the meeting is being held that possession of a handgun is prohibited. Additionally, these laws prohibit individuals from carrying a gun into: university operated K-12, prekindergarten, or daycare programs or facilities; collegiate athletic events that have security plans approved by the Arkansas State Police; and at UAMS, provided its security plans are approved by the State Police.

License holders must present their licenses to law enforcement if asked, but not to anyone else, like faculty or administrators.

An individual with a concealed carry permit who has completed the additional enhanced certification training under Act 562 is not required to reveal their permit status unless asked by a law enforcement officer in accordance with Ark. Code Ann. § 5-73-315. No action may be taken against an employee or student because of their status as a concealed carry permit holder.

Properly licensed individuals may not be excluded from class or elsewhere because others feel uncomfortable that Arkansans are exercising their rights.

The mere act of carrying a concealed handgun (with a license and enhanced training as authorized by law) is not in and of itself a disruption of class activity or other university operations. Likewise, another person’s adverse reaction to someone carrying a handgun in accordance with Arkansas law is not grounds to eject a licensee from the classroom.

The law goes into effect on September 1, 2017. The Arkansas State Police will have until January 1, 2018 to design an enhanced carry certification training program for those interested in carrying a concealed weapon on public university campuses.