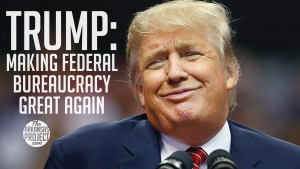 Donald Trump is the least-regulatory President since Ronald Reagan, according to a recent review of new rules and regulations by the Competitive Enterprise Institute’s Clyde Wayne Crews.

According to Crews, the Federal Register for Trump’s first nine months in office stands at 45,678 pages. That’s a dramatic reduction compared to President Obama’s Federal Register at this time last year — which was 67,900 pages.

The Federal Register is the federal government’s official journal of regulations, proposed regulations, and notices.

That 32 percent reduction in Federal Register page count is the largest since Reagan, according to Crews. However, it took Reagan three years in office to reduce the Federal Register by one-third. It looks like Trump is well on his way to outpacing the Gipper in this area.

The Trump mode has been to regulate bureaucrats rather than the public. New, large-scale regulation has largely stopped in 2017, and where it hasn’t, new costs are required to be offset.

Trump’s focus on tax reform and cutting red tape is exceptionally good news for consumers, businesses and the economy. In recent years, I’ve estimated the baseline for the U.S. federal regulatory burden has amounted to nearly $2 trillion annually. This amounts to a hidden tax of nearly $15,000 per household in a given year.

Getting rid of complicated and unnecessary rules would create a fairer and simpler system that will help get America working for everyone. The combination of regulatory reform and tax reform would jumpstart the economy, finally resulting in the economic relief Americans have been waiting for: more jobs and higher wages. It would also help small business owners, driving more growth, investment, and productivity.

Trump was scheduled to speak at a “Cut Red Tape” event yesterday, but skipped it due to the mass shooting in Las Vegas Sunday. The event was going to highlight his January executive order requiring federal agencies to eliminate two regulations for every one new regulation adopted.