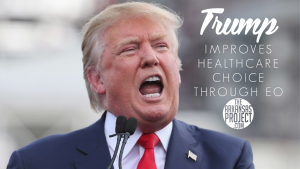 The executive order gives the departments a two- to four-month deadline for rule changes to be proposed. Trump said in a press conference today that he wanted the Labor Department to look at ways to allow Association Health Plans to be sold across state lines. These plans aren’t subject to minimum coverage requirements under Obamacare. Therefore, expanding access to them could lead to Americans having more health care options with cheaper premiums.

Trump said at a press conference today that today’s announcement was only “the beginning.” He said he’d continue to try to get tax reform as well as repeal and replace legislation of Obamacare through Congress.

Today is only the beginning. In the coming months, we plan to take new measures to provide our people with even more relief and more freedom. And, by the way, on another subject, that will include massive tax cuts. We are going to get massive tax cuts…the whole country is looking for these massive tax cuts, and we will get them.

And we’re going to also pressure Congress very strongly to finish the repeal and the replace of Obamacare once and for all. We will have great healthcare in our country.

Total and partial Obamacare repeal bills have failed multiple times to get through the Senate. The reaction from Obamacare defenders about the relatively minor changes announced today has been total outrage. I don’t know whether that says more about how unhinged Trump’s critics are or the fragility of the Obamacare framework, but I’ll let our readers decide.