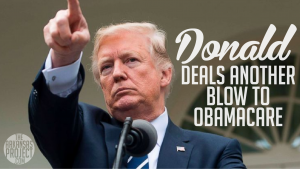 These subsidies were ruled unconstitutional in federal court in a case brought by House Republicans against the Obama administration in 2014. We wrote about that case here. Basically, the Obama administration was using federal funds to pay the cost-sharing expenses of insurance companies in a way that helped keep the cost of some special policies artificially low for lower-income consumers.

Unfortunately, these cost-sharing expenses were never appropriated by Congress, so it’s questionable whether these payments were even legal in the first place. That’s why Trump announced Friday these subsidies are ending.

Based on guidance from the Department of Justice, the Department of Health and Human Services has concluded that there is no appropriation for cost-sharing reduction payments to insurance companies under Obamacare.  In light of this analysis, the Government cannot lawfully make the cost-sharing reduction payments.  The United States House of Representatives sued the previous administration in Federal court for making these payments without such an appropriation, and the court agreed that the payments were not lawful.  The bailout of insurance companies through these unlawful payments is yet another example of how the previous administration abused taxpayer dollars and skirted the law to prop up a broken system.  Congress needs to repeal and replace the disastrous Obamacare law and provide real relief to the American people.

It has been clear for many years that Obamacare is bad policy.  It is also bad law. The Obama Administration unfortunately went ahead and made CSR payments to insurance companies after requesting – but never ultimately receiving – an appropriation from Congress as required by law.  In 2014, the House of Representatives was forced to sue the previous Administration to stop this unconstitutional executive action. In 2016, a federal court ruled that the Administration had circumvented the appropriations process, and was unlawfully using unappropriated money to fund reimbursements due to insurers.  After a thorough legal review by HHS, Treasury, OMB, and an opinion from the Attorney General, we believe that the last Administration overstepped the legal boundaries drawn by our Constitution.  Congress has not appropriated money for CSRs, and we will discontinue these payments immediately.

Most Obamacare defenders in the media have said this is just another example of Trump “sabotaging” the law. Of course, this is like saying someone who reports their disreputable business partner to law enforcement for money laundering is “sabotaging” their partner’s finances. “Sabotaging” illegal acts is actually good. It’s called the rule of law.

Trump’s action on Friday also shows the perils of governing by executive action. If these subsidies can be created by executive action, they can also be ended in the same manner. Candidate Trump surely never promised to protect and continue the executive overreaches of his predecessor.

In the near future, the Congressional Budget Office (CBO) finds that the end to the subsidies will actually lead to fewer uninsured by 2020 (although some consumers will face significant premium increases). Arkansas insurance companies received approval for larger rate increases than they had originally requested Friday. This means that the ball is back in Congress’s court again to repeal and replace Obamacare — so as to provide the public with relief from its impending collapse.