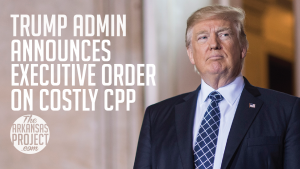 Late last month Trump signed an executive order directing the Environmental Protection Agency (EPA) and Department of the Interior to “review, and if necessary, revise or rescind” several regulations that “may place unnecessary, costly burdens on coal-fired electric utilities, coal miners, and oil and gas producers.”
One of these regulations is the Clean Power Plan (CPP) — which we’ve highlighted repeatedly at this blog as an example of an Obama-era regulation that would harm everyday Arkansas utility customers in the pursuit of limited environmental gains.

Scott Pruitt, Trump’s EPA Administrator, said in a statement about the executive order:

The American people deserve an EPA that works to protect both the environment and enables a growing economy. Our EPA puts America first. President Trump has a clear vision to create jobs and his vision is completely compatible with a clean and healthy environment. By taking these actions today, the EPA is returning the Agency to its core mission of protecting public health while also being pro-energy independence.

Trump ran and won on a platform of rolling back regulations, such as the CPP, that will lead to huge utility cost increases for everyday Arkansans.

A study by the American Coalition for Clean Coal Electricity (ACCCE) found that Arkansans would face an average annual electricity price increase of 20 percent if the EPA’s so-called Clean Power Plan isn’t repealed.

Arkansas Attorney General Leslie Rutledge described the harm the CPP would cause financially to Arkansas ratepayers if it were fully implemented.

Rutledge said in a statement:

The unlawful Clean Power Plan would have brought great harm to ratepayers across Arkansas, which is why I joined a lawsuit in 2015 seeking to stop it. Fortunately, the U.S. Supreme Court issued an unprecedented stay, halting the plan from moving forward. And thanks to the action of President Trump today, the EPA can return to the drawing board to craft a plan that seeks input from the states and actually protects the environment, not push the agenda of a liberal few.

The CPP could — in exchange for these price increases — potentially reduce the average global temperature by as little as one-thirtieth of one degree…by 2100, according to some estimates.

It’s nice to see that the federal government is now run by people capable of balancing both the needs of the economy and the environment. You can read the full executive order here.