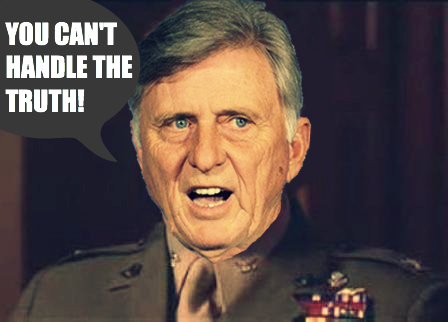 For about a week now, Governor Mike Beebe has seized just about every available opportunity to launch visceral attacks against our friends at Americans For Prosperity-Arkansas for their new television ad that allegedly “trashes Arkansas.”  The governor even used his weekly column/radio address to tear into AFP-AR, saying “not everyone wants Arkansas to look good in the eyes of others.”

In short, Beebe — who urged all of us to “believe in Arkansas” when he ran for governor — doesn’t believe Arkansans can cope with straight talk about our state.

“When someone claims legitimate criticism is ‘trashing’ Arkansans, one should consider whether they themselves are ‘trashing’ our people by selling them short and believing they are unable to handle it when someone says Arkansas can do better.”

(Perhaps Westerman’s statement was inspired by this famous riposte.)

Here’s the problem Governor Beebe has: the facts are not on his side.  In fact, the evidence is so weighted against him, it makes me want to ask, “Why is Governor Beebe trashing the truth?”  All of Beebe’s claims that Arkansas is “doing so well” seem to be centered around his nebulous claim that we are now, magically, 5th in education (despite the fact that this claim has been repeatedly debunked) and that we have “created thousands of jobs,” despite a real unemployment rate of more than 9% — and despite the fact that one of his pet corporations, LM Wind Power, is making mass layoffs.  What else can he point to that shows that Arkansas is “doing so well?” (You can see our extensive and embarrassing list of Arkansas comparative rankings here.)

Surely he’s not going to mention the grocery tax, which he promised to eliminate in his initial campaign for governor, but remains on the books? On the contrary, I expect him to start talking about it again soon: it seems to be the proverbial carrot that he teases Arkansas voters with every time he needs some conservative cred.  And after his rampage against AFP, he’s in short supply of it.

The timing of this Beebe assault is also interesting: Up to this point in Beebe’s reign, we have been led to believe by his handlers and reporters — who live in the revolving door between the Little Rock media outlets and the governor’s office — that Beebe is some sort of moderate champion, a “conservative Democrat.”  Plenty of actual conservatives have disparaged this notion for many years, but it hasn’t seemed to stick.  Beebe won re-election handily in 2010, despite Republican gains in both chambers of the legislature, a Republican U.S. Senate victory, and three out of four House Republican congressional victories.  Now, as the GOP looks poised to take both chambers of the state legislature for the first time since Reconstruction, are the wheels coming off of the Beebe bus?

On Wednesday, Talk Business released a new poll that showed Governor Beebe with a 64% favorable rating, but the same poll showed generic Republican legislative candidates receiving 49% of the vote to Democrats’ 36%.  According to Dr. Jay Barth, who helped craft the poll, “The huge problem for Democrats is that they were losing independents statewide by nearly two-to-one (51%-26%) on the generic legislative question.”  Granted, Beebe’s public attacks against AFP began on Monday the 24th and the poll wasn’t published until the 26th, but it was conducted on the 17th.  One has to wonder if Governor Beebe had access to the numbers and knew his team was in trouble, and therefore went into attack mode — an attack mode that, for Beebe, seems somewhat unprecedented.

But perhaps we should overlook all of that — the distortions of Arkansas’s achievements, the bad employment numbers, the shilling.  What I want to know is why is Governor Beebe so upset by facts?  And more importantly, why is Governor Beebe so distracted by a television ad that promotes more economic freedom in Arkansas?  Perhaps one answer to this question is that the ‘moderate, peacemaking, sensible’ Mike Beebe never really existed.  Perhaps, somewhere within that revolving door between the media and the Capitol, the truth got lost.  Maybe, just maybe, Governor Beebe really doesn’t like economic freedom — maybe he really does want more government, more dependency, more people on Medicaid, and more people entangled in a state-level version of Obamacare.  Maybe he really does “stand squarely with Barack Obama,” as he famously said a few years ago.  And maybe his true colors are starting to shine through.