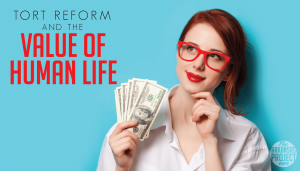 You hear a lot of platitudes in politics – sayings that sound nice but are really meaningless. One that pops up a lot in the debate over tort reform is one that goes, “You can’t put a value on human life.” In fact, that’s what Jerry Cox, president of the Family Council Action Committee, claims in a recent Democrat Gazette op-ed. It sure sounds nice when he writes these words; too bad that he makes no sense.

Unfortunately, this confusion about what juries do isn’t the only problem with Cox’s op-ed. He also seems unaware about what SJR 8 actually does. For instance, he says that if SJR 8 passes, he can “imagine multimillion-dollar, corporately owned [nursing home] facilities knowing they can cut staff and reduce care without the threat of a lawsuit.” I’d love for him to point out where in SJR 8 there is any ban on suing nursing homes. Or maybe he could point out where it gives nursing homes a legal shield so they can reduce care and harm their residents. The simple fact is that SJR 8 does not do these things. If nursing homes, or anyone else, is negligent or causes the death of someone else, they can still be sued. Juries can still award damages – especially punitive damages, if necessary.

Perhaps Cox does not realize what juries actually do. Maybe he doesn’t realize that SJR 8 still allows people to sue nursing homes. Whatever the reasons, I’m not sure why he has written such a hyperbolic op-ed that leaves a false impression of SJR 8. It seems that he’s trying to co-opt the “pro-life” message to give cover to attorneys who do not want to see their lucrative lawsuits threatened.

Indeed, Cox makes so many mistakes in his op-ed that it suggests he simply does not understand what SJR 8 would do. He repeatedly argues that the compensation that a litigant could recover for pain and suffering would be limited to $500,000, but he overlooks the fact that a finding of punitive damages could multiply that figure to one or two million dollars. He argues that tort reform backers should have focused on attorneys who bring frivolous lawsuits, but he ignores the fact that attorneys who bring frivolous lawsuits are already fined in the heaviest possible way (under current law, they can be forced to give up their fees, pay the other side’s fees, and lose their license to practice law), And he argues that tort reformers should have focused on medical malpractice reform, but he really ought to know that the current Supreme Court’s interpretation of Amendment 80 blocks the legislature from changing the rules of evidence that create medical malpractice problems — and that SJR 8 would allow the legislature to solve the problem that our Supreme Court has made unsolvable. It is almost as if Cox declined to talk to any competent attorneys before writing his jeremiad against tort reform; his piece gives the impression that he is completely unaware of how the civil justice system actually works.

According to Cox, “Anyone who is genuinely pro-life knows that everyone’s right to life is God-given. You can’t put a price tag on a God-given right. Yet, that is exactly what this proposed amendment does.” Yes, SJR 8 does put a cap on non-economic damages. But so do juries across Arkansas every time they award damages in a civil case involving someone’s death. The kindest thing to say here is that Cox’s case against SJR 8 is, therefore, gibberish and doubletalk. Until Cox begins advocating for the abolition of monetary damages in civil cases, his objections to SJR 8 should not be treated seriously.