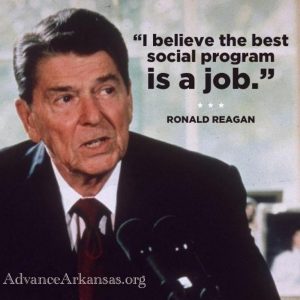 Earlier this week, the state’s Department of Human Services released the latest enrollment numbers in the Medicaid “private” option expansion. So far, enrollments are way above forecasts: according to DHS, PO enrollment has now reached 155,567.
Many supporters of the “private” option no doubt see this surge in enrollment as a good thing. After all, “It’s not costing Arkansas a dime!” For example, I was stunned to see this headline from THV yesterday: “Statewide enrollment numbers shows private option successful.” If we are to believe that high enrollment in government programs equates to success, then I guess we should enroll everyone in government healthcare and welfare programs. Maybe throw in an Obamaphone while we’re at it? Think of all the success! I mean, I guess you could argue that if our prisons are full of convicts, this shows that Arkansas’s criminal justice system is a big success.
But on a serious note, this kind of story overlooks a key point: the original projections from the state’s consultants said enrollment would only reach 123,500 this year. At 155,567 enrollees, the program is 26% above where it was projected to be for this fiscal year — and we still have over two months left.
I’ve requested some numbers from DHS that should give us a better idea about where enrollments might end up at the end of this fiscal year. If I get that information, I will update this post.
Taxpayers should be concerned about such a large discrepancy between the original enrollment estimates and reality. We know the per-month cost estimates are currently off by roughly 12%. If the enrollment projections are off by as much as 26%, what other parts of the original projections (compiled by the Optumas firm) might be way off target? What will be the real budget impact on Arkansas in just two years, when Arkansas has to pick up part of the costs? Is there any reason to believe the Optumas study at all? And shouldn’t taxpayers be concerned that this study was the critical factor for many lawmakers who ultimately decided to vote for this program?
If you’d like to hear answers to some of these questions, Senator Bryan King has been successful at bringing the Optumas consultants back to Arkansas. The consultants will appear before the Joint Public Health Committee tomorrow at 1:00 in the MAC building — you know, the building with the committee rooms where there aren’t any cameras. Perhaps the Optumas analysts will be able to explain why some of the errors in their projections aren’t really errors. In case you are interested but can’t make it, we will try to supply some video for you to view later at your convenience.
Unlike the proponents of expanded entitlement programs, I strongly agree with President Ronald Reagan who famously said, “We should measure welfare’s success by how many people leave welfare, not by how many are added.” That is the correct yardstick for measuring the success of the “private” option. The fact that the legislature has created a new entitlement class — and made 155,567 people (so far) dependent on government and taxpayers — is no reason for celebration. It is not a sign of success: it is a cause for concern and it should spur legislative action to put Arkansas on a prosperous economic path that leads to more employment, not more dependency.