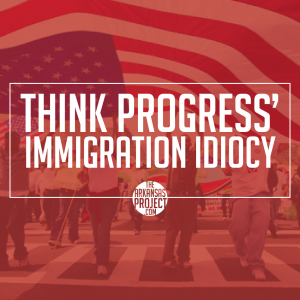 On Tuesday, the Republican-controlled House Judiciary Committee will hold a hearing with the less-than-impartial title, “President Obama’s Executive Overreach on Immigration.” But many of the same members of Congress who are decrying the president’s unilateral decision to halt the deportations of some undocumented immigrants are using their own unilateral power to effectively halt deportation of individuals of their own choosing.
Sunday, Senator-Elect and current Rep. Tom Cotton (R-AR), sharply criticized last month’s executive action. “The president just lost an election, in no small measure because wages for working families are declining and unemployment is still too high in too many places, and the first big action he took after the election was to make it easier for illegal immigrants to get jobs, not for working families to get jobs,” he told Meet the Press host Chuck Todd. In earlier interviews, he threatened to defund such action and suggested the possibility of blocking judicial nominees to retaliate for what he termed “President Obama’s lawless actions.”
But a little-noticed bill filed by Cotton in June would grant similar protections to a trio of non-citizens, “Notwithstanding subsections (a) and (b) of section 201 of the Immigration and Nationality Act.” His bill would have allowed Meriam Yahya Ibrahim (a Sudanese woman later granted asylum after being sentenced to death for apostasy after converting to Christianity) and her children eligibility “for issuance of an immigrant visa or for adjustment of status to that of an alien lawfully admitted for permanent residence upon filing an application for issuance of an immigrant visa.” While the House never acted on Cotton’s bill, it was not necessary.
Here’s why: any individual U.S. senator or representative can file a “private bill,” proposing relief for a person who has not been granted asylum or citizenship, but still wants to live in the United States. The bill gets assigned to a committee, but almost never comes up for a vote. While in committee, the administration is asked to weigh in on the merits of the person in question. The U.S. Immigration and Customs Enforcement (ICE) almost always allows the individual to stay in the country under “deferred action,” as long as the bill is technically pending in Congress. The end result is that sponsor is unilaterally able to do much the same thing as the “deferred action” granted by President Obama and his predecessors in both parties. At the start of the next Congress, the bill’s sponsor simply re-files the bill, restarting the process.

You see, according to ThinkProgress, if you help a family whose mother has been condemned to death in her home country for being a convert to Christianity, you therefore lose the moral authority to criticize an unprecedented executive order by President Obama that provides approximately 5 million illegal aliens with “deportation relief” (which used to be called amnesty).
It’s a mistake of degree. The boss, Dan Greenberg, said the article reminded him of behavior by his son — who has been known to load his pockets up from the “take a free mint” bowl on his way out of a restaurant. The failure to understand differences of degree is pardonable if you’re a child, but it’s harder to respect if you’re an adult and journalist.
In short, Cotton’s bill is comically minor compared to Obama’s action — namely, the largest use of deportation deferral in U.S. history.
Before Obama, the largest “deportation deferral” was 250,000 in 1977 by President Carter. Of course it is true that past Presidents from both political parties have deferred deportation for illegal immigrants, but no president has unilaterally taken an action that benefitted so many illegal immigrants before.
From TruthRevolt:

The other major immigration actions (those impacting hundreds of thousands) taken by previous presidents were usually founded in Congressional legislation rather than being unilateral executive orders as Obama’s major moves have been. There’s a reason Obama himself said in 2013 that he would be “violating our laws” by doing the very thing he is now proudly enacting.

Contrary to ThinkProgress, actions like Cotton’s should be applauded; they are a worthy part of America’s immigration policy. President Obama’s action, on the other hand, should be fought vigorously by Congress.