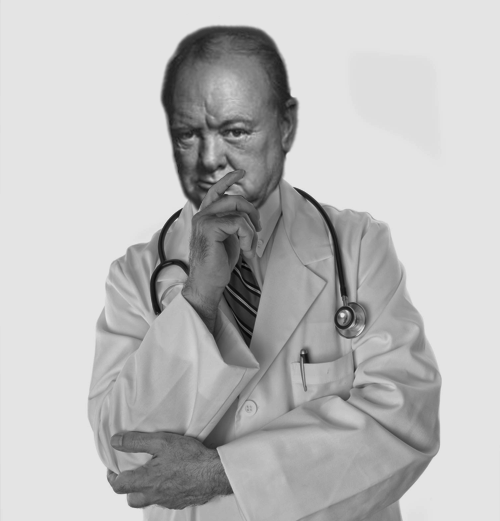 Yesterday, I attended a meeting of conservative activists and legislators at the Capitol. Senator David Sanders and Representative Randy Alexander were the guest speakers. The topic was Medicaid reform / expansion / the ”private option.”

Winston Churchill famously said “Russia is a riddle wrapped in a mystery inside an enigma.” Compared to the Medicaid “private option,” Russia is a first-grade textbook. Although Senator Sanders gave an extensive talk about the private option, its details remain hazy.

Senator Sanders began the discussion by thanking folks in the room for being suspicious of the private option: “If you weren’t [suspicious], I would be nervous.” Then he discussed at length the problems facing Arkansas: dealing with the burdensome mandates of the Affordable Care Act (Obamacare), shoring up the shortfall in the Medicaid program — which official reports say is $61 million, but Sanders says is much higher — and overhauling the existing Medicaid program to ensure that those who need care get it. Sanders said fixing the existing system must take precedence over any additional changes. Additionally, Sanders said he has been and remains opposed to Obamacare, but said there is a cost to the state if there is no action taken:

For months, we thought, ‘Is there anybody who will talk to us…about other options for folks who are uninsured?’ My goal was to do nothing. But then I began to realize and you read that stinkin’ law — it’s pretty long — and you realize if we do nothing there actually is a cost to the state. The people who are commonly referred to as [creating] the ‘woodwork effect’ who are currently eligible for Medicaid today but who are not on the program for whatever reason will now be covered. So, if we do nothing, those folks will be added to the Medicaid rolls… If we do nothing, we are not going to be able to get any reforms. So doing nothing includes really blocking reforms on the current system and we’re adding people.

I’m not entirely sure what Senator Sanders meant by this. A possible interpretation is that perhaps this signifies unsuccessful political negotiations, rather than a neutral analysis of what problems can be fixed in the law.

Sanders said his focus then shifted towards the questions of how Arkansas could reduce Medicaid rolls and increase the flexibility of the system. He flatly rejected the traditional Medicaid expansion model, but indicated that the jury is still out on whether or not the private option is a preferable way forward. Also, to his credit, he was blunt with the group and admitted that the private option is not a “free-market solution:”

Hear me, and hear me good: I am not saying that this is a free-market solution. What I’m saying is one approach, even doing nothing, or make that expansion as set out in the ACA — no way — doing nothing adds more people to the rolls, then the cost curve continues to rise, we don’t see the reforms that we need…so this third option has presented itself.

Sanders said he is very skeptical of the CBO numbers that say the cost of the private option will be  50% more per enrollee than traditional Medicaid. He told the group that an actuary has looked at this and found what lawmakers suspected:

It doesn’t blow the budget. In fact, just by looking at the straight numbers, you’re looking at a 15% cost differential. But if you take into consideration the full picture it’s about the same and then possibly…it could possibly cost less than what would happen under Medicaid expansion.

In general, Sanders’s comments were light on specifics (they focused, instead, on why he found other alternatives unpalatable), but towards the end he gave us some insight into what may be coming. As we’ve previously speculated, Sanders said one of the elements of the plan he has seen would take people off of the public Medicaid rolls and allow them to purchase private insurance — “albeit subsidized, I’ll give you that,” he said. Nothing new here, except this is the first time I’ve heard a lawmaker willing to call a spade a spade and admit this model is a subsidy scheme — and this honesty is notable and commendable. Additionally, Sanders alluded to a new wrinkle that I had not previously heard as part of the plan: the legislature is considering rolling back the ARKids program and instead putting children on their parents’ policies. He also floated the idea of instituting a “fail-safe” or a “stop gap” much like Arizona has adopted. Under this provision, if the federal government decides to change their matching reimbursement rate — which they have already indicated they are willing to do — Arizona ends their expansion program. Sanders said he doesn’t have a lot of faith in the federal government to keep their word and “if that’s the case, it goes away.”

The conservative base need to understand what the choice is we really have here: the choice is not are we going to pass Obamacare or not. We got it. The choice to me really is, if we opt out completely and they give us what they’re going to give us — is that better? Or is it better if we come up with something that still wouldn’t be…wouldn’t be our first choice, but it will do less damage and might even do some good things and that’s really the question. I don’t think we’re there yet. I don’t think we know the answer to that.

Alexander said the way the legislature is moving will reduce the Medicaid rolls, not increase the rolls. Additionally, he said “it would provide care that doctors would actually take.” Alexander emphasized that the legislature wants the agreement in writing, in statute so that it can’t change in the future, citing that as his main question at this point: “We want to pass a law that says ‘this is what happens and if this doesn’t happen, we’re out.” There are no final cost estimates available, but there could be some ready as early as today.

“There are just lots of unanswered questions,” he added. “At this point, easily, there are more than enough Republicans that are still not sold on this that it won’t pass.” Additionally, Alexander said the legislature is not going to be rushed and that they are willing to block the DHS budget “to help get their attention.” He assured the group that a large number of Republican legislators are more than comfortable letting the session end without taking any action: “If we don’t have the information we need, we are not going to act.” Presumably this would mean a special session, as Majority Leader Rep. Bruce Westerman is now calling for.

Regrettably, both of the legislators who spoke today were light on specific details of what the private option will actually look like. Perhaps that is no fault of theirs: as they both said, there is only a verbal agreement in place with the federal government — and until something is in writing, it is difficult to do a full analysis. Unfortunately, even though nothing is in writing, advocates of expansion are telling lawmakers to “hurry up and do it.” While the clock continues to tick and the public continues to be left in the dark, the more suspicion will grow.

I also still have serious concerns about the cost of the “private option” which, any way you slice it, is Medicaid expansion. Let’s say the CBO is wrong as Senator Sanders said — let’s assume the private option is not going to cost 33% more than regular expansion. Let’s even say that the 15% calculation being floated by Republicans is wrong and that break-even estimates are wrong. Pretend with me for a moment that this private option model would actually lead to lower costs for the state than regular expansion, as Senator Sanders said was possible — won’t those additional costs still be significant? Won’t those costs still be in the hundreds of millions of dollars per year for a program that is already at least $60 million in the red? And won’t those costs still be higher than the cost of doing nothing?

Perhaps the answers will become abundantly clear if and when something is publicly released, but it is currently hard for me to see how embracing the private expansion model will save Arkansas any money. In fact, it reminds me of our President’s explanation of how he’s going to cut the debt by reducing the amount of new debt that the government incurs. At the end of the day, the debt is still increasing, just at a slower rate than it would have. Ultimately, the Medicaid program is still growing and we still can’t afford it. As I have written and as Michael Cannon has said, the best path still appears to be refusing implementation and forcing Congress to take up repeal or significant restructuring of Obamacare.

5 thoughts on “The Private Medicaid Option: From the Sphinx’s Mouth”