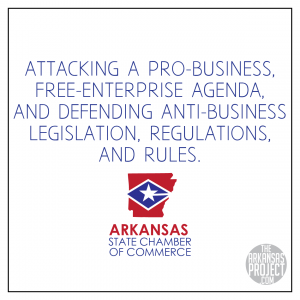 Many who are sympathetic to the Arkansas Chamber of Commerce’s stated goal of a “pro-business, free-enterprise agenda” were startled by its actions last week – especially when it issued a statement calling for “intense opposition” to HB 1158. HB 1158 attempts to lessen the heavy burden of occupational regulation in Arkansas by providing a defense in court to overregulated businesspeople. You might think that the state Chamber – which bills itself as working for a “lower cost of doing business, fairer taxes, fairer regulations, and less regulatory paperwork” – would support lightening the burden of occupational regulation. But you’d be wrong.
As we’ve noted before, Arkansas isn’t the land of opportunity when it comes to occupational regulation. Arkansas has more occupational licensing than any of our neighbors – and, indeed, more than any southern state. Studies regularly demonstrate that the benefits of licensure are either nonexistent or vastly overstated. A few years ago, a survey by the Institute for Justice found that Arkansas has the second most burdensome set of occupational licensing laws in the nation. If any state needs occupational licensure reform, it’s Arkansas.
Nonetheless, last week the Chamber issued a blizzard of bulletins predicting disaster if HB 1158 passed; below are a few quotes from the emails they sent out. They explained:

As someone who’s actually read HB 1158 (click here for our paper on it), I was taken aback by the state Chamber’s predictions of doom. When I read the bill, it was obvious that it would lead to some relatively minor regulatory reforms; the Chamber, on the other hand, argued that the bill would eliminate every occupational regulation in Arkansas. It was almost as if their people hadn’t read the same bill I had. So I contacted Professor Robert Steinbuch, a professor at UALR’s Bowen Law School, to ask him about the Chamber’s charges. Here’s what he wrote me:

The statements of the Chamber about the consequences of HB 1158 are erroneous. HB 1158 doesn’t eliminate licensing.
First, the bill expressly exempts professions from any deregulation at all if, under state law, those professions carry with them fiduciary duties. Those exempt professions are myriad: they include (among others) lawyers, accountants, engineers, and architects.
Second, the bill expressly exempts those who are government employees or contractors from any deregulation at all.
Third, the bill expressly protects bona-fide occupational regulations that directly protect health and safety. The only occupational regulations that the bill might affect are those that cannot be justified on health or safety grounds.
Notably, the bill would not have any immediate or general impact on our current licensing regime. If someone used an 1158 defense in court so as to demonstrate that some particular regulation overreached, this proposed law would expressly limit the result of that defense to the litigant, not to other similarly-situated third parties. The impact of the 1158 defense, over the long term, would be to force regulatory agencies to confine their regulatory scope to appropriate and bona-fide health and safety concerns.

I appreciate that it is hard to read legislation carefully, but it is also hard to avoid Steinbuch’s conclusion that the Chamber’s warnings were inaccurate. Indeed, I became increasingly concerned about the inaccuracy of the Chamber’s statements in the debate over this bill generally when I read its attack (quoted immediately below) on the research of UCA economist David Mitchell:

On February 12, testimony was offered in Committee that if passed, HB 1158 would create 8,000 new jobs in Arkansas. No information was provided substantiating this claim; however, the logical conclusion is that HB 1158 would promote widespread delivery of unqualified services to unsuspecting Arkansas businesses and consumers that could cause a public safety risk.

I attended that committee hearing, and I have to conclude that the above claims of the Chamber are wrong: no such testimony was ever offered about HB 1158 at all. You can check this out for yourself: call up the video library at arkansashouse.org and watch the February 12 Public Health committee meeting. You’ll see Professor Mitchell explaining that:

If Arkansas reduced its low-wage licensing just to the rate of Missouri, we could add 8,668 more jobs in the state of Arkansas. That’s a lot of jobs. That would reduce our unemployment rate from 5.7 percent to 5.1 percent. Further, our research shows that, if we reduce our occupational licensing to that of Missouri, that African-American poverty rates would fall by 5.3 percent. Also, 22,773 people would be raised out of poverty. That’s exciting stuff — so passing this bill will empower Arkansans, because it will help reduce unnecessary and inappropriate licensing.

In short, Professor Mitchell never said that Arkansas would create 8,000 more jobs by eliminating occupational regulation: rather, he said that Arkansas would create around 8,000 more jobs if we lowered our level of occupational regulation down to Missouri’s. And, you know, I’ve been to Missouri, and it ain’t exactly a Wild West of deregulation. Maybe Missouri is a land of “unqualified services” and “public safety risks,” but if so, I sure didn’t notice. Of course, it is true that the state of Missouri doesn’t require people to get a license and five years worth of training in order to agree to paint or insulate a building, or to put up drywall – nonetheless, the last time I went to Missouri, I didn’t notice much difference in building quality up there at all.
In short, it is clear to me that when Professor Mitchell discussed HB 1158, he was careful about the accuracy of his statements. We’d all be better off if those who discussed HB adopted Mitchell‘s apparently unusual model.