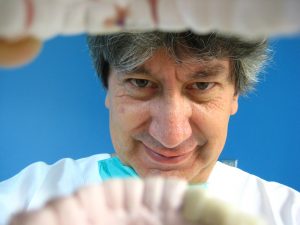 in·qui·si·tion (inkwiˈziSHən), a period of prolonged and intensive questioning or investigation.
On Friday, September 13, 2013, Dr. Benjamin Burris was summoned before the Arkansas State Board of Dental Examiners. Dr. Burris, an orthodontist, had previously told Arkansas Business that he was being called in front of the board because he was offering dental exams for half the price that other local dentists charged. According to Dr. Burris, those other local dentists complained to the board because they didn’t like Dr. Burris offering services such as dental cleanings, X-rays, and exams at significantly lower cost.
Burris offers dental cleanings at several clinics in northeast Arkansas. When questioned by board members, he explained that he had decided to offer this service to the public because the conventional price is prohibitive. “Demographically, people just can’t afford cleaning a family of four. You’re talking about $200, $250 apiece twice a year.” Furthermore, dentists often recommend teeth cleaning on a quarterly basis, not just twice a year. “We have hygienists there, and we have a licensed dentist there, and we saw no reason to deny the public that service.”
However, in their questions to Burris, board members suggested that Burris might be violating the law – in particular, the law that confined the scope of Burris’s practice to his own specialty, orthodontia. Burris responded that he had read the law, that he was a law-abiding citizen, and that his interpretation was that his conduct was within the scope of the law. In particular, Burris argued that cavity detection was within the scope of his professional responsibilities as an orthodontist. By means of their questions, however, board members suggested that Burris seemed instead to be practicing general dentistry, rather than orthodontia, when offering cleaning services to the public.
Burris then pointed out to the committee that there are larger questions than regulatory categories at issue. “The Delta of Arkansas is a place where there’s not a lot of access to dental care. And not only is it a financial issue, there’s social, there’s temporal, there’s educational, and there’s cultural issues at stake here too. My understanding is that less than 50% of the people in the Delta see a dentist regularly.” Burris also alluded to the case of Diamante Driver, whose death from an infected tooth and inadequate dental care made him an emblem of the regulatory and financial failures of Medicaid. Burris’s bottom line was that his clinics were “increasing access to care at a lower price … which is not bad public policy.”
Several of the board members made statements that seemed designed to deflect Burris’s larger point about public policy. One board member suggested that Burris was trying to “skirt the law,” which strikes me as more of an insult than an argument. Another board member argued that Burris should give up his orthodontic license if he wanted to offer any dental services. Another board member said that he appreciated Burris’s efforts at providing extra cleanings to his orthodontic patients, “but I still think that their general dentist needs to be in control of their restorative health and their hygiene.” This pronouncement seems to evade the reality of the Delta that Burris had alluded to, in which access to the services of a general dentist is far from a sure thing.


One of the board’s most disturbing inquiries came from the board’s attorney, Kevin O’Dwyer, who noted that Burris had “contacted the newspaper” and asked “What was your reasoning for calling and talking to the newspaper?” It is highly unclear what the relevance of Burris’s exercise of his First Amendment rights could have to do with the board’s deliberations.
Burris occasionally was assertive or defensive when answering the board’s questions. My view is that a certain degree of assertiveness or defensiveness is perfectly appropriate when a citizen is before a licensure board which has called you in for questioning, which has the power to take away your license, and which questions suggest that it might more interested in protecting the turf of a special interest group than protecting the public. (It’s instructive here to view the comments just under the Arkansas Business story, which appear to consist largely of out-of-state dental professionals who are horrified at the dental board’s scrutiny of Burris; several of them use the word “turf” to criticize the board in their comments.)
After several questions from board members about the nature of his practice, Burris then started to question the board whether he’d satisfy the board if he hired additional dentists on-site to supervise dental hygienists. O’Dwyer deflected Burris’s question by replying “I think at this point what we’re doing is asking you what your practice setting is.” Later on, O’Dwyer read the state’s official definition of the scope of orthodontic practice aloud, suggesting that it encompassed everything that orthodontists are allowed to do. Incredulously, Burris asked if that definition would prevent him from addressing hygiene and cavities in his patients, at which point Burris’s interlocutor immediately changed the subject. To sum up: If the point of the questions Burris asked of the board was that it’s a little unclear what the law requires, he certainly convinced me. And if nobody knows what the requirements of the law are, there’s an argument that the idea of “law” doesn’t really apply here at all.
The board will likely take action shortly. Whether they decide to restrict Burris’s practice in the future – and therefore place obstacles, in the way of our neediest citizens, to low-cost access to health care – remains to be seen.
Please follow and like us:

4 thoughts on “The Inquisition of Benjamin Burris”