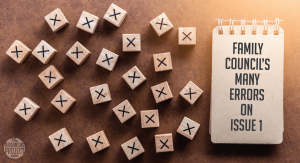 The past two days I’ve written blog posts taking issue with how Jerry Cox of the Family Council is misleading Arkansans about Issue 1, the lawsuit reform measure that will be on the Arkansas ballot in a month. For some reason, the Family Council Action Committee has devoted a lot of time and resources into fighting Issue 1. It’s strange because I can’t find much evidence of a pro-family group doing something similar in other states that have considered tort reform. That’s because it is a big stretch to say that tort reform is tied to the pro-life or pro-family cause. The Family Council has made that stretch, however. In fact, it has stretched the Bible and the facts to make the case against Issue 1 — stretched them so hard that they are in danger of snapping. That is a disappointing stance for a faith organization to take.

Consider its misuse of the Bible to support the political agenda of lawyer lobby. The Family Council contends that, indeed, protecting high attorney fees is a moral issue. To do that it quotes Proverbs 22:22-23: “Do not rob the poor because he is poor [and defenseless], nor crush the afflicted [by legal proceedings] at the gate [where the city court is held]. For the Lord will plead their case and take the life of those who rob them.” If you notice, there are brackets in that quote. Words have been conveniently added to this passage to give it a meaning that is not present in the original language.

It’s also bold to say that the poor are helped by fighting against caps on attorney fees. You would think that capping fees would be good for a poor client – more of the money from a settlement goes to them and not to lawyers (who are, presumably, not poor). But the Family Council instead bemoans the high cost of legal services as oppressive to the poor (an argument that could just as easily apply to the high cost of any good or service), but then argues against attempts to cap those costs. Or, as I discuss below, it argues at one point against capping legal costs — but then reverses itself later.

I also find it strange that the Family Council has decided to embrace access to legal services to the poor. I don’t recall it ever doing any lobbying on behalf of organizations like Legal Aid, which provides free legal services for the poor. Nor do I ever recall it talking about bail reform or other issues that have a far more direct bearing on legal access for the poor. It’s probably just a coincidence that the Family Council’s interest in this issue aligns in both timing and substance with the priorities of the lawyers fighting Issue 1.

Mr. Cox and the Family Council like to paint themselves as concerned for fair justice in the tort system. That sounds great. So why are they supporting a system that currently provides awards based more on the advocacy of lawyers than the facts of individual cases? Economic damages, which are based on facts, are untouched by Issue 1. Non-economic damages, which are based on the emotional feelings of a jury as directed by the most rhetorically skilled lawyer, are at play here.

Mr. Cox and the Family Council like to focus on the punitive damage limits. They contend that the limits that Issue 1 will put in place would lead to bad actors getting away with murder. What Mr. Cox and the Family Council ignore is this part of Issue 1, which provides that punitive damages are not limited if “the finder of fact determines by clear and convincing evidence that: (A) The defendant intentionally pursued a course of conduct for the purpose of causing injury or damage to the claimant; and (B) The defendant’s intentional conduct harmed the claimant.”

It of course depends on the individual situation in each case, but it is absurd to argue that the villains who populate the horror stories manufactured by the Family Council (the makers of intentionally defective tires or the intentional dumping of toxic chemicals into reservoirs, for instance) would categorically face no prospect of unlimited punitive damages. The Family Council suggests a world of anarchy upon the passage of Issue 1, where evildoers just kill and main the young, disabled, and elderly with no regard, because they can write off a $500,000 verdict. What these absurd claims miss is the fact that many other states already have such limits; for some reason, we do not see these things happening there.

Of course, the Family Council says it is not opposed to tort reform, just this tort reform. Mr. Cox said the same thing to me during our conversation. I’m a little bit skeptical that they are saying this in good faith, however. Consider the alternatives to Issue 1 that are promoted by the Family Council: the very first one they suggest is a 30% cap on attorney fees. That’s interesting for a group that is opposing Issue 1’s 33% cap on attorney contingency fees, supposedly based on a principled belief that these limits hurt the poor. When someone is arguing against a cap one minute and then suggesting an even stricter cap later, a logical conclusion is that this person is not being sincere. In fact, it suggests that the person is simply arguing any position that sounds good, regardless of the facts or truth of the matter.

The list of acceptable tort reform policies that the Family Council suggests include many changes to the rules of the legal game: the state should adopt a “loser pays” system, regulate class action lawsuits, etc. These are ideas that sound good, but the Family Council undercuts its support of them by also saying that the legislature should not set rules of procedure for the judiciary. As I explained yesterday, the reason past tort reform efforts have been invalidated by the courts is because the courts interpret these reforms as infringing upon the judiciary’s sole authority to make rules of practice and procedure. It’s almost as if whoever is writing the Family Council’s material is aware that, because of the state Supreme Court’s control of these matters, they will never get enacted — at least without some sort of Issue-1-style constitutional change. It’s almost as if the list of reform ideas provided by the Family Council are cosmetic, and are not really intended to be taken seriously. I am pretty sure that the Family Council’s position on (for example) abortion has never been “the legislature is likely to screw up these complex and technical matters, so ultimately we need to leave these matters to the courts.”

The fact that the Family Council and Jerry Cox say they support tort reform and yet oppose giving legislators the power to write court rules and procedure indicates one of three possibilities. They may be profoundly ignorant of the state’s past experience with tort reform measures and the constitutional changes necessary for future reform. Or they are cynically doing the bidding of the trial lawyers that are funding the Family Council Action Committee, but still trying to maintain some credibility with the conservative audience they are trying to convince to vote against Issue 1. (If that’s the case, it’s a clever game for the Family Council Action Committee to play, where it supports the trial lawyers’ position to kill real reform measures but then give lip service to reform ideas that can never be enacted under the current system.) Or perhaps Jerry Cox has simply convinced himself that he is morally obliged to do what he’s doing — in spite of the many false statements, insupportable legal conclusions, and slippery campaign-style slogans that are now the bread and butter of the Family Council’s argument against Issue 1.

I do not know which of these three perspectives is true. But any of these three possibilities should be highly embarrassing to the organization and its supporters. It’s sad to see Mr. Cox and the Family Council Action Committee use their well-earned pro-family credentials to advance the agenda of the lawyer lobby. It’s even sadder to see them twist Bible verses, spread falsehoods, and make overtly contradictory arguments about Issue 1 to do so. Perhaps they should take another look at the Biblical passage regarding bearing false witness.