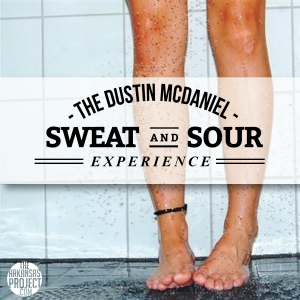 Earlier this month, we were pleased to hear that Attorney General Dustin McDaniel was helping to fund a new program for UALR’s Bowen Law School.
(And not only because we thought a McDaniel endowment might provide fodder for commentary. If McDaniel was going to put his personal stamp on the new program – consistent with his values – imagine the possibilities of what might be funded! Perhaps the Department of Hilariously Wrong Supreme Court Predictions? Or the McDaniel Foundation for Pointless Press Releases? Or the McDaniel Center for Experimentation with High-Risk Marital Infidelity? Or the McDaniel Institute for the Protection of Criminals’ Privacy? Perhaps McDaniel might fund a UALR Guilt Project, in order to counter the malign influence of Yeshiva University’s Innocence Project?)
The reality was a bit less exciting: just a law school gym, which will be funded with a generous “donation” of public funds from the attorney general’s office. Bowen Law School, of course, will reciprocate by advertising how generous McDaniel has been with your money: more precisely, the law school will put up a plaque that specifically thanks our hard-working attorney general for his extraordinary effort in procuring six figures worth of public money to pay for the Bowen gym.

As we noted in our previous coverage, putting a gym in the law school seems like a sub-par use of public funds. Compare Bowen to the Fayetteville law school, which used its six-figure gift of public funds from McDaniel to reduce law students’ tuition. Perhaps Fayetteville’s attention to law students’ real needs (for instance, reducing the crushing burden of tuition debt that most law students will face immediately upon graduation) is one reason that that a recent report lauded Fayetteville as the number one best law school value nationwide. Bowen is nowhere to be seen on the list of the top 20 bargains in law schools nationwide; however, it did demonstrate its thriftiness by purchasing a self-promotional advertisement on the very same page of the magazine that featured the list.
For some reason, however, the law school administrators apparently gave very little thought to how this gym would actually work. There’s just one tiny implementation problem: in a word, it’s the showers.
The Bowen law school gym is on the 6th floor. The showers that students may use are in the law school’s basement. Let us do what the law school’s planners apparently never did: let us imagine what will happen when students use the gym. Let us further assume that, at some point, 6 students will simultaneously show up to use 6 of the exercise machines in the gym, that each student will use the machines for the same period of time, and that each student will want to shower afterwards.
Unfortunately, what this means is that, on average, each of these students will have to wait 75 minutes to step into the shower, because there is a significant drainage time-delay problem for the basement showers.

That email, translated, means that it will take 30 minutes for the dirty water from each previous shower to disappear down the basement drains. We admit to some skepticism about how often this facility will be used when law students realize that — assuming they want to clean up after a workout — any use of the gym could easily be followed by a one- or two-hour wait to use the basement showers. There’s also a bit of a safety issue down there; unlike the territory in the rest of the law school, there are no security cameras in the basement. One wonders what the response of law school administrators will be to this problem when it is widely known. Perhaps they’ll recommend having study sessions in the basement while waiting for a free shower; perhaps they’ll recommend that students use the shower simultaneously. At some point, the majority of students will respond to Bowen’s failure of planning by diminishing their use of the gym; perhaps a small minority of students will respond by exercising but not showering – a choice that is intended to improve the quality of their own lives, but not so much the lives of others.
Thomas Hobbes famously said that life in the state of nature would be “solitary, poor, nasty, brutish, and short.” Unfortunately, we predict that the same description will apply to the Bowen basement shower experience.
(UPDATE: We corrected this post to fix a small mathematical error.)