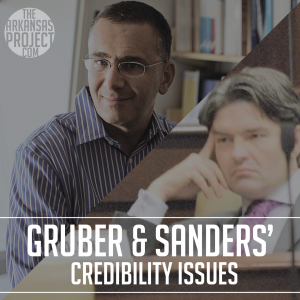 “Private Option” Medicaid expansion architects have been busy obfuscating news that broke last week about Obamacare architect Jonathan Gruber. Gruber was caught telling the truth about various matters in a politically harmful way (also known as a Kinsley Gaffe) — for instance, he famously explained that it was “mathematically impossible” for the “private option” to be budget-neutral.
Interestingly, the response of the private-option architects to Grubergate was, functionally, the same as Nancy Pelosi’s: Gruber’s ideas are dangerous, and therefore Gruber is a pariah who must be discredited. State Sen. David Sanders’s appearance on Capitol View earlier this week provided a terrific example of PO architects’ obfuscation agenda.
Sanders on Capitol View about Gruber’s comments:

“He’s the architect of Obamacare. What Arkansas did with the private option undercut his life’s work, and it was a different model, and he was working off of bad numbers, and he was working off of numbers that grossly inflated what the cost would be. And we built a program that does it a lot better than what Washington was trying to force down everyone’s throat.”
…
“This is the Obamacare architect, a guy who we know has major credibility problems who said “we lied in order to get it passed.” Now he says “I don’t understand the Arkansas math.” Well, his math was bad, and this guy has major credibility issues … he’s taken aim at it, and I wouldn’t expect him to be happy with Arkansas’s private option.

But surely Sanders is smart enough to realize that Grubergate wasn’t about a methodological debate over budget numbers. The reason Gruber has been in the news lately is due to his open admission of what many have long known: Obamacare would never have passed if its architects, when explaining the new law’s operations, had been clear and honest with the American people. That’s why there’s been such outrage at Gruber; people don’t like it when the wide receiver who scores the touchdown then spikes the football. When Gruber explained that “Lack of transparency is a huge political advantage. And basically — call it the stupidity of the American voter or whatever — but basically that was really, really critical in getting the thing to pass,” he was not actually making a point about competing economic models.
Regrettably, just as passage of Obamacare at the federal level was accomplished with false promises, passage of the “private option” Medicaid Expansion in Arkansas was accomplished with a truckload of misleading statements and arguments. (David Ferguson of Conduit for Action provides an extensive history here.) And here are a few more thoughts from Sanders:

“This idea of Premium assistance isn’t one that we came up with.”
…
“We were never going to expand Medicaid. We weren’t going to do it. It wasn’t going to happen.”

It is troubling that Sanders continues to insist that the private option has the same methods or goals as the conservative policy of premium assistance. We’ve refuted this before. The entire point of premium assistance is that price-sensitive consumers will make intelligent decisions about insurance coverage. But private-option consumers won’t be making price-sensitive decisions, because private-option coverage is, for all practical purposes, completely taxpayer-subsidized.
Just the same criticism applies to the private option’s fake medical savings accounts. Medical savings accounts are meant to give health-care consumers an incentive to watch for fraud, wasteful spending, and inefficient provision of medical services; MSAs are based on the theory that people are good at keeping an eye on how their own money is spent. The medical savings accounts in the private option accomplish nothing like that: all they do is encourage people to make microscopic donations into individual savings accounts by repaying the depositors a cash bonus later on. Again: that isn’t premium support; that isn’t consumerism; it’s just subsidization.
Indeed, Sanders still refuses to acknowledge that the “private option” was Medicaid expansion. Just this week DHS announced approximately 218,000 Arkansans have gained health insurance through the state using…wait for it…Medicaid dollars! Arkansas’s private-option clients receive Medicaid benefits; they are, demographically, composed of just the same clientele as Medicaid beneficiaries in other states; they are legally classified as Medicaid recipients and receive the same rights and benefits as any Medicaid enrollee; they receive benefits through a Medicaid waiver and an amended Medicaid state plan; and those benefits are funded via the Medicaid program. Insisting that the private option is completely different from Medicaid expansion isn’t really an argument: it’s more like the kind of irritable mental tic that one can see from Spinal Tap’s Nigel Tufnel.
Putting old wine in new bottles isn’t a “different model”; it’s just different marketing. It is awfully mysterious that “private option” architects seem to believe that giving over 200,000 able-bodied adults access to Medicaid dollars — with virtually no real reforms — isn’t an expansion of the Medicaid program.
Will “private option” architects resist real reforms to the program in 2015, as Obamacare architects have at the federal level? Stay tuned!