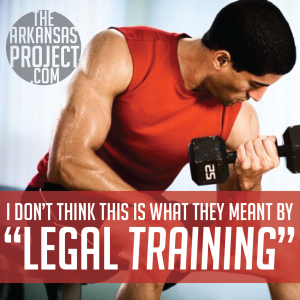 You might recall our earlier coverage when Attorney General Dustin McDaniel “donated” $100,000 of your money to the University of Arkansas at Little Rock Bowen School of Law – to subsidize what appears likely to be a sickness-causing fitness center. (The gym, containing seven fitness machines, lacks any shower facilities or any other way for patrons to clean themselves; because of limited shower facilities in the basement, it is only usable by about two law students at any given time, assuming those students want to clean up after a workout.) Law school administrators were so grateful to McDaniel for handing over your money that they purchased and installed a custom-made plaque thanking him.
One might think that a law school that is drowning in red ink would spend its time and money on righting its ship. But the problem goes beyond administrative decisions that are imprudent. It looks likely to us as if the spending was illegal.
We asked McDaniel where he got the authority to give away money that could have gone back to taxpayers. He directed us to Act 763 of 2013, sponsored by Representative (and likely future Auditor) Andrea Lea. As Lea has rightly noted in the past, the Act is about accountability and transparency. But Act 763 places limits on how public funds can be used: any Act 763 funds must go to (1) restitution or other purposes designated by a court order or settlement agreement, (2) designation of funds to an agency that is related to the litigation, (3) payment of attorney fees or civil penalties, or (4) payment into the consumer education and enforcement fund.
When we asked McDaniel’s office which of these four criteria the “fitness center” would fall under, we received an extremely lawyerly answer from his spokesperson, Aaron Sadler: “The state’s law schools have always been approved by the General Assembly as reasonable recipients of funds from cases pursued by this office. Under Act 763, all distributions are reviewed by the Legislature, which has oversight and budgetary veto power over state agencies.”
Let us translate that from bureaucratese into English. As far as I can tell, it expresses two highly dubious propositions: namely, (1) we’ve traditionally given settlement funds to law schools in the past, so a little technicality like Act 763 really shouldn’t get in the way, and (2) the state legislature said it was OK, Caleb, so why are you bothering me about it?
Sadler’s first argument – we’ve always done it this way, so we can ignore the new law that the legislature passed last year – is weak enough to collapse spontaneously without any help from me. But his second argument deserves scrutiny: it implies that the legislature gave informed consent to the attorney general’s decision. There is reason to believe that this never happened – that the legislature was misinformed.
That is because McDaniel’s office is required by law to issue a regular report to the legislature that explains what of each one of his donations is supposed to accomplish. Here’s what McDaniel’s office said about the $100,000 Bowen donation: the money is for “legal education and training.” To repeat, “legal education and training.”
Huh?
We have unsuccessfully deployed the entire investigative resources of The Arkansas Project for any explanation of how footing the bill for a private gym could be construed as funding “legal education and training.”  When Fayetteville got an identical check from McDaniel for an identical purpose, their dean spent it on educational scholarships. Now that sounds like “legal education and training.” Sometimes just following the law earns you accolades. Good job, Dean Nance!
How could this misspending of $100,000 of public money happen?
Here’s the current story. McDaniel says he gave no direction to the law school about how the funds were used. But according to the law school, Dean Michael Hunter Schwartz spoke with McDaniel about the gym and “Dustin liked the idea.” You know, there’s just a bit of an inconsistency here.
We wonder whether the green-eyeshade crew at Legislative Audit will be interested in this matter. In any case, forgive us for stating the obvious: namely, illegal spending that is engineered by the state’s chief lawyer and a crew of law professors should be enough to satisfy anyone’s recommended daily allowance of irony. Why, it’s almost as if these legal professionals don’t take what is supposed to be their chief area of competence – namely, the law – very seriously.

One thought on “The Bowen Gym: Not Just Indefensible, But Also Illegal!”