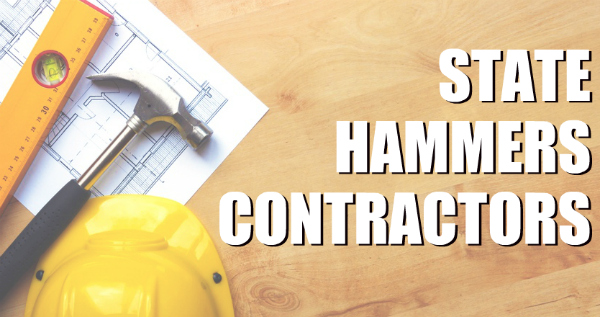 I gotta tell you, the thing about state government is, you can’t let your guard down for a second, or they’ll go doing something else more or less outrageous.

Today’s entry: The Arkansas Democrat-Gazette’s Alison Sider reports on the ongoing state effort to force licensing on home remodeling contractors (subscription required). A law passed in this year’s legislative session, Act 1208, requires residential remodeling contractors working on projects that exceed $2,000 to be licensed by the Arkansas Contractors Licensing Board. Those who fail to acquire a license face heavy fines of up to $400 per day.

Act 1208 and its attendant rules and regulations have been pitched as consumer protection measures, which is typically a good clue that something unsavory is afoot—politicos and bureaucrats invoke “consumer protection” as a smokescreen to disguise all kinds of depredations.

Given the low threshold of $2,000, which would require contractors to pay additional fees for licensing or risk fines, it’s hard to avoid the conclusion that a key aim of Act 1208 is to create an unnecessary barrier to entry, keeping small players out of the marketplace and restricting competition. In fact, I’m not “avoiding that conclusion” at all. That is completely and totally what my conclusion is. The fact that the bill’s sponsor, Rep. Bruce Cozart, a Hot Springs Republican, is himself a building contractor does not inspire further confidence.

Sen. Jonathan Dismang (R) has been a leading critic of the law, and he’s leading the charge to have it repealed. But fear not—the state board won’t be going to be checking up on contractors, they claim, but only responding to consumer complaints:

Greg Crow, the board’s administrator, said until the law’s future is more clear, the board will pursue complaints from consumers. But the board will not actively seek out unlicensed home remodelers.

The board pulled down rules it had proposed to implement the law in order to clarify its aims for the next year.

“What we’re going to put explicitly in our regulations is that all we’re going to be doing for the next year, or more than a year, until you all reconvene again, is to deal with educating the public on their responsibilities to hire good contractors,” Crow said at a meeting Monday of the rules subcommittee of the Legislative Council.

With five inspectors for commercial and residential contractors, Crow said, that was never the board’s intent.

“As far as doing random checks to see if someone has a license, I don’t know if we have the time or the forces to do that in the next year,” he said.

That’s fine, I guess, but I think the lawmakers who want to repeal (or at least revise) this misguided legislation are probably on the right track. While it’s kind of Crow to promise not to enforce the law too harshly, it’s preferable to rein in the board’s power to harass contractors.

But that won’t happen anytime soon. “At some point, we need to repeal this and send the money back” to those who have already paid the licensing fee, Dismang told me today. “Unfortunately, we’re not going to be able to do anything before it takes effect.”

The occupational licensing racket has been an occasional preoccupation around The Arkansas Project. Our own Dan Greenberg, back in the days when he was doing everything he could to make himself persona non grata in the state legislature, was profiled by Reason magazine in 2008 for his war against the Arkansas Interior Design Board.