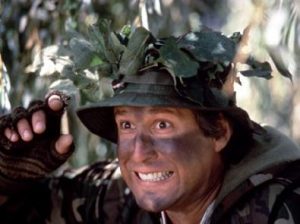 The debate over extending legislative term limits in Arkansas is only just beginning. Unfortunately, that debate has been diluted: in this year’s legislative session, the legislature opted to couple term limits extension measure with ethics reform. The amendment’s ballot title says nothing about extending term limits. Instead, it mostly discusses ethics reforms and then, in the last line, says it is intended to “establish” term limits. This, to say the least, has concerned many conservatives around the state.

I attended the Faulkner County TEA Party luncheon last Thursday in Conway, as did Conway state Rep. David Meeks. Meeks was not scheduled to speak, but after some debate between scheduled speakers about the merits of the ethics/term limits amendment, Meeks took to the floor to clear the air. He supplied a troubling explanation of (1) why the term limits extension was coupled with ethics reform and (2) why it doesn’t really matter that the ballot title won’t include a reference to extending term limits.

That’s a terrible argument, especially considering that tort reform didn’t make it to the ballot (in its stead, we got a different amendment: one that makes it harder for the people to amend the state constitution).

As for why the ballot title doesn’t explain that the amendment would extend term limits, Meeks said that ultimately it’s up to each voter to become informed and read the full amendment personally. If they do so, they will discover the term limits extension and they can then cast an informed vote.

It’s certainly true that each voter has a responsibility to become informed, but I’d say it’s unlikely that every voter is going to read this 22-page amendment. In fact, many voters will read nothing but the ballot title — and when they do, they’re going to come away with a very misleading impression about what the amendment actually does: 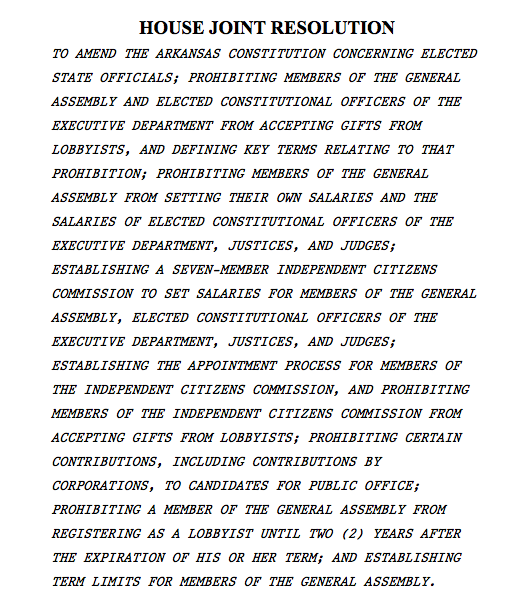 There was also some debate at the meeting over how much the amendment would extend term limits. Meeks argued that the bill would only extend term limits by two years. This statement springs from a “Big Chill”-style rationalization currently touted by many supportive legislators. The theory is that, because they are currently allowed to serve 6 years in the House and 8 years in the Senate (for a total of 14), moving the limit back to 16 years total is only an extension of two years. This isn’t a serious argument because service in the House is not meaningfully comparable to service in the Senate: it is much easier to run for re-election than it is to run for a different office in the other chamber. The districts are different sizes, composed of different voters; they’re sometimes occupied by an incumbent, preventing a House member from jumping over.

Interestingly, the overwhelming sentiment among the meeting’s attendees was in favor of keeping Arkansas’s existing term limits, for one simple reason — that multiple folks vocalized: the existing term limits make Arkansas legislators more responsive to their constituents.

Look, I get it: legislators don’t like term limits. They want to stay in the legislature as long as possible so they can consolidate power, “learn how to govern better,” and all that jazz. But the people of Arkansas don’t just like the existing term limits — they love them, as evidenced by the 70% rejection of an extension at the ballot box in 2004.

David Meeks is an all-around good legislator that I often agree with. He has one of the best voting records in the Capitol: he’s been one of AAI’s Friends of Freedom in both of his sessions. On this issue, he is wrong.