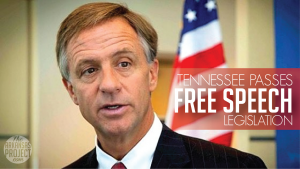 According to the Foundation for Individual Rights in Education (FIRE), the law’s free speech protections includes these policies:

SB 723 is the most comprehensive state legislation protecting free speech on college campuses that we’ve seen be passed anywhere in the country. It is gratifying to see the Tennessee legislature take decisive action to protect the expressive rights of students and faculty, especially in light of the number of restrictive speech codes across the country and the recent controversies over speech on campus.

As you’ll remember, one of those “controversies over speech on campus” occurred last month at the University of Arkansas, when a speaker critical of some Islamic practices was disinvited from a law school symposium.

Bob Ballinger said the law passed in Tennessee would generally be a good idea for Arkansas.

The whole point of a university is that  different ideas would come into conflict with each other and people would have to wrestle with it and figure out which ideas rise to the top as being true. When a university is actively pushing out some ideas and embracing other ideas…they’re not performing their role as a university.

Passing this law in Arkansas would ensure that public Arkansas colleges and universities would no longer be able to be bullied into cancelling speaking invitations due to political correctness. That means public colleges and universities would be able to introduce students to a wide variety of ideological viewpoints and let them decide for themselves.