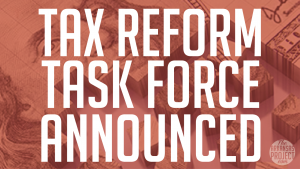 Speaker of the House Jeremy Gillam and Senate President Jonathan Dismang both announced their appointments for the Arkansas Tax Reform and Relief Task Force today.

The task force will consist of 10 Republicans and 6 Democrats.

The members will be responsible for producing a set of recommendations to improve Arkansas’s tax code by September 2018 — just in time for the 2019 legislative session.

There will be a lot of work for this group to accomplish.

One area to work on will be lowering Arkansas’s income tax rate.

Arkansas has the highest top individual income tax rate as compared to the surrounding states — 6.9 percent — so there’s definitely room for improvement, according to the Tax Foundation.

Dotson said regarding his goals for the task force:

I think we’ll take a serious look at all these taxes and exemptions Arkansas currently has on the books so all Arkansans will be able to keep as much money in their pockets as possible. We’ll look at ways to make our tax code fairer, more streamlined and get the rates as low as possible on everyone. We also need to look at broadening the base to make sure there’s sufficient revenue coming in while getting the rates as low as possible to get a much more thriving environment for Arkansans, for job growth and for businesses to invest in Arkansas.

Here’s hoping this task force will mark the beginning of broad-based tax relief to more Arkansans in 2019.