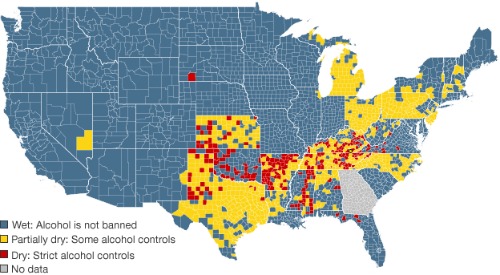 A dedicated Arkansas Project reader sends along a link to this nifty map from those limey toffs at the BBC offering “a snapshot of wet and dry America.” They slipped out of their powdered wigs and put on their thinking caps to generate this graphic detailing the lingering effects of alcohol prohibition here in the U.S.

With 43 dry counties in red, Arkansas looks to be a national leader (?) on this front. I don’t think I realized how much of the nation lives in open territory when it comes to alcohol sales. I mean, geez, look at that vast swatch of liberatory bluish gray once you move west out of Oklahoma and Texas, and head north from Kansas. I also like that there’s “no data” on Georgia, so it’s grayed out like a medieval dragon preserve. That actually sounds about right.

This is really just an excuse to link to this masterly 2009 piece from the estimable Michael Tilley of the City Wire in Fort Smith, wherein he explored the “convoluted concoction of rules” that govern liquor sales in the Natural State—and lived to tell the shocking tale! A taste:

We have rules as to when and how alcohol can be sold from either a convenience store, grocery story or a bonafide liquor store; rules differentiating between sales of wine fermented in Arkansas and wine fermented outside the state. There are rules that say your local Chili’s or Applebee’s is simply a restaurant that can serve beer if built in a wet county, but is a special private club with a (wink, wink) membership policy to go along with food sales if it operates in a dry county.

There are rules on specific times hooch can be sold on the weekends because we’re all mindful of and in agreement with the seminal Harvard study proving that a beer sold at 9:59 a.m. on a Sunday morning leads to immediate and terrific societal destruction, whereas the same beer sold 61 seconds later is nothing more than a standard commercial exchange between consenting adults that results in a positive economic impact for the local economy and tax proceeds for state and local governments.

Not familiar with the Harvard study? Of course you’re not, because no such study exists. Which is something to keep in mind when considering dang near all Arkansas liquor laws and wondering if there is some pragmatic reason for their formulation — No Such Study Exists.

Do go revisit the whole thing and weep for the dearth of good sense that requires you to rush out and buy your Sunday beer supply at 11 p.m. Saturday.

The Slow Death of Prohibition | BBC